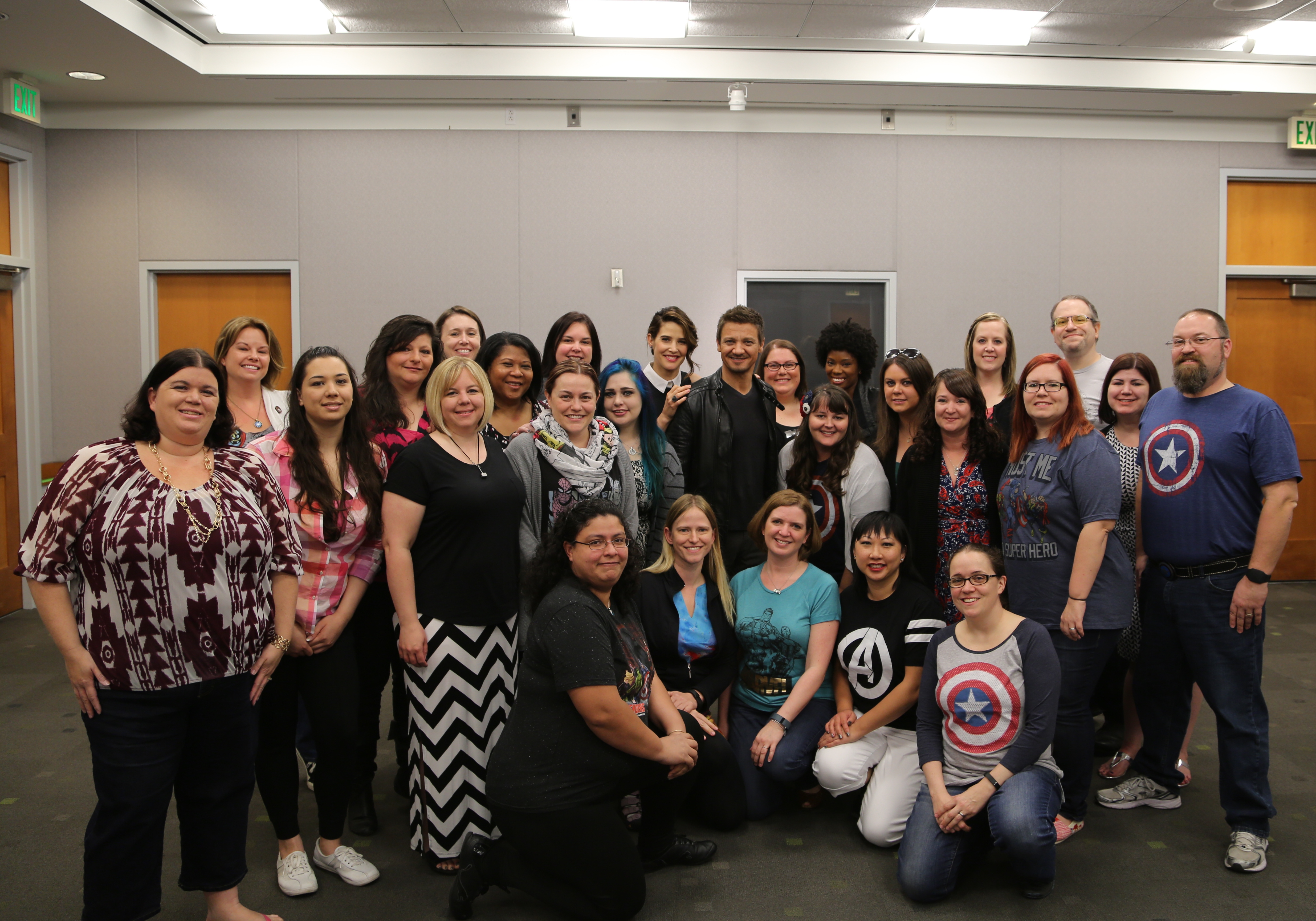 Our very first interview during the #AvengersEvent press junket was with Jeremy Renner (Hawkeye) and Cobie Smulders (Agent Maria Hill). I attended an expense paid trip by Disney to press events for Marvel’s Avengers: Age of Ultron (#AvengersEvent, #AgeofUltron), all opinions as always are 100% my own.

I was looking forward to this interview because, after seeing the movie, I had a better respect for Hawkeye as a character. There was a lot of character development for Hawkeye in this movie including something that I wanted to ask him about right away, but it is a spoiler and so I’ll have to leave that question for the spoiler episode of Dad.FM podcast that I did.

Each time I hear people talk about the movie and the female characters they always mention Black Widow and Scarlet Witch but they don’t mention Maria Hill as much. Maria Hill certainly is a strong female character in the movies and she also shows up in Agents of S.H.I.E.L.D. once in a while. It think that it is because she isn’t in the movies as much as the other characters and there hasn’t been much of a story around her so far. The first question that I can talk about was for Cobie.

How was it to film, to be like this awesome woman agent and all men?

Cobie: It’s very fun. It’s interesting because people talk about that a lot with these films that there’s few females. And it’s a male driven film. This is our second one. We all get along so well. I don’t feel that divide on set. We have some other strong females, Scarlett and now Lizzie. It’s just nice seeing more women coming into these films.

I have a question for Cobie as well. The last time we talked about the first Avengers in New York you had said that you thought that you were just gonna be serving coffee in the very beginning. So you’ve been in several movies since then. So how did you feel about entering the role for this movie?

Cobie: Well, I feel like I might still be making coffees. But at Stark Tower there might [be] just a really nice espresso machine. So it’s like really fancy coffees. Cobie joked. No, I don’t think I’m serving coffees anymore. It’s really cool. In the comic books Maria Hill has her own story line. She’s very smart. She’s very independent. She’s very controlling. It’s cool to see, now that this team is sort of under Tony’s protection and sort of funded by him, how that’s working in terms of privatizing security and her dealing with that. It’s fun to be a part of the team but also to be managing everybody as well or trying to anyway.

We then shifted the questions over to Jeremy and discussed his expanded storyline.

Jeremy, you had a bigger role in this movie. And I have a feeling that as soon as it comes out and all the kids see it and all the parents see it that your character’s just gonna explode. I mean I can see it being, you know, big. How do you feel about that? Are you ready for that?

Jeremy : I don’t know what that ultimately means. [LAUGHTER] I mean I think the greatest thing that I get out of this whole experience of being in this giant movie and the one prior – artistically it doesn’t like really hit a lot of nerves in my body. But when a five year old ran up to me that changed the game. I’m like, ‘Oh, wow, I have a five year old fan.’ When the little kids come on up to you, God, it just crushes me. I’ll stop and do anything for a little creature, man. I’m crazy about them. So, the short answer, I welcome that. If it’s the little kids.

He then went on to tell a story about a father and 5 year old son who approached him at Starbucks dressed as Hawkeye. He was all good with the son being in costume but having the father dressed in the costume randomly at a Starbucks that seemed a bit creepy to him. Save the costumes for Comic-Con.

So this is a question for both of you. How did you physically prepare for the movie? And then what was the hardest scene for you both to film?

Jeremy: We’re in the gym lifting weights, hurting our bodies. Hardest scene to film and difficult, I don’t know. They’re all quite difficult I think. The first scene we shot was the end of the movie in Italy where the chaos is going. When there’s a lot of movie parts that’s where it gets a little tricky. Then the moving parts aren’t really there in real life. So that’s a little trickier. You’re stabbing things with arrows that don’t exist and then firing arrows that don’t exist to things that don’t exist. But to me I think it’s fun because it’s like a dance. There’s a technique to all that stuff. But it is quite arduous.

Cobie: Training, every time these movies come up, a couple months before you start working out. I did a few stunts in this one, not as much as the super heroes in the film. But, it’s good to get in shape. In terms of the most difficult scene, in this movie there’s a lot of scenes where we’re all in the scene together…

Jeremy: Those are all difficult scenes, right?

Cobie: Yes, we have a lot of fun together. So it’s a hard group to wrangle as well. But, these scenes, we take multiple days to shoot them ’cause there’s so much coverage. So on the third day you’re like, wait, what are we doing? What is the scene? What did I say? You sort of feel like you’re in this Groundhog Day where you’re just you’re doing the same thing over. But you’re trying to remember exactly how you did it the day before. So that’s challenging.

I asked a second question in this interview. I was excited to ask one but to get in two was awesome.

Where do you want to see each of your characters go in the subsequent movies?

Cobie: You know, there’s so many different directions. There’s a plethora of comic books and cartoons and all these things that they could pull from. So for me personally it’s hard to say. I mean it’d be cool to learn more about Maria Hill’s past and sort of how she came to be where she is. But, it’s hard to say. It’s very much under Marvel’s control. And they’re very great at choosing great storylines. So we’ll see.

Jeremy: Yeah, I think for me, I have a lot of ideas. But it doesn’t really ultimately matter. The relationships are kind of what are interesting in this world with others. I’d just like to see the new ones start and others fade, and deepen. I think that’d be interesting. That’s what I’d be curious about the next upcoming ones.

It was a really nice interview to start off the day with. Cobie and Jeremy were wonderful.