Today was the Allison’s Family Reunion. It was a gathering of her grandparents, their children and grandchildren and great grandchildren. We’ve been having these sort of events at Aunt Jan’s house for the past few years and they are a lot of fun. This year was one of the best in my opinion. This year we got together and had a Steak Tip Recipe Competition. See, we can’t just get together to get together, there is always an element of game play or competition involved. I like that.

The two judges were Doctor/Uncle /Father Tom and Father Mike. Allison’s Uncle and his friend who are both Franciscan priests. So, I know that by having two priests judge your competition, the winner is irrefutable here on earth and also in heaven. And as we all know, God loves steak tips.

There were 8 entries in the competition, about 15 lbs of steak tips pre-cooked as well. We were pretty well covered for everyone to have a nice filling portion. Uncle Jim cooked everything, he did four sets of tips at a time. Then he sliced up the tips and the judges tried them. He put the 1st four sets of tips up on the warming rack and cooked the second set of four. The judges had a pretty elaborate scorecard with points ranging to 100. In front of them they had the eight plates and they also had the recipes for each of the competitors offerings.

Once the judges had time to taste every tip and make their judgement it was time for the fans to get their fill. I took a plate and numbered it evenly from 1-8 on the outer rim. Then I put two pieces of each of the different kinds of tips on the place and put an amazing pasta salad in the middle. It had Gorgonzola and bacon in it, how can you go wrong! I ate one piece of each of the tips and made my decision. But to be double sure I went around and ate the second tip.

We had all eaten our fill and it was time to announce the winners. The Fan Favorite was Grandpa Bob’s Teriyaki Steak Tips (They were delicious). He won a grilling book and a bottle of Wine.

Then it was time for the judges choices. The Judges explained their scorecard and read off everyone’s scores. My two sets of tips came in first and second. I was thrilled to win but also felt bad because I had intended to submit one recipe, just a hot and spicy version and a more mild version. Apparently the judges liked both and I won. I think that everyone had a fantastic recipe and there were no bad tips at all. They were very delicious and everyone came up with something good. I will make sure that if I ever make two versions that they only get entered as one choice. 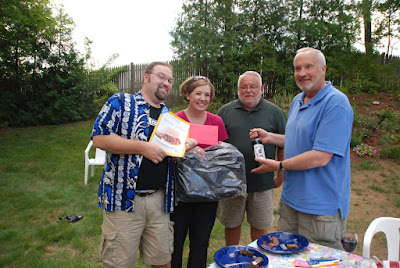 So what did I make? If you recall the post that I put up titled Something Special in Store then you know a few of the ingredients. I Montreal Steak Seasoning from McCormicks on each set of tips. I used the Spicy seasoning and the mild. Then I filled the plastic bag with my homemade beer from MakeBeer.net. I marinated the tips overnight and then drained the beer out this morning at 5:00am. Then I put the Country Bob’s Sauces in each of the bags. One set of Tips was called the “Jesus is our CEO Steak Tips”. That was the mild version. Now the spicy Version the people at Country Bob’s might not like the name but I called it “The Devil is our Accountant Steak Tips” because they were SPICY steak tips, really spicy.

The whole day was a lot of fun. Eva played with her cousin and we got to meet our newest 2nd cousin. We had good food, a lot of laughs and stories that you can tell over and over. We also had some delicious desserts and I made two pans of “Nacho Average S’Mores” which are actually called “Nacho Mamas S’Mores” and are a recipe from the food network that I learned about and first experienced back in 2006 at a Cookout in PA. This is probably one of the best ways to eat S’Mores, Ever!

We might give Aunt Jan a hard time about these competitions but I for one love them and have taken many of the ideas over the years and adapted them to other events. I think that sort of thing is friendly and fun and when it is food related competition then we all win. It was also really nice to get a full family photo as well. 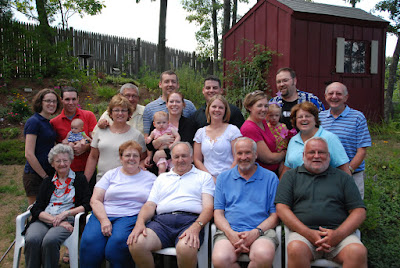 Aunt Jan also gave the girls (Eva and her cousin and 2nd cousin) buckets with special headbands, magic wands and beach fun toys too. Eva loved running around and playing with that wand. She also loved running around with Grandpa Dano’s camera and taking shots of everyone. She loves using the camera now and she gets some fun shots.

We drove home, Allison with her mom in her car and Eva, Dan and I in mine. Eva fell asleep hard after all her playing with uncles and cousins. When we arrived home Marcia presented Eva with a new set of dress up clothes. The dress from the Princess and the Frog, so now Eva can not only say she is Tiana but she can dress like her too, complete with light up princess shoes. She’s going to love to have that when we go to Disney in September.

I retreated to the dining room and recorded my weekly podcast with Daniel M. Clark. Geek Dad’s Weekly where we talked about comic books, the Princess and the Frog and also the ShadowBlaster. I’m very serious about making this a great podcast, so much so that I went and pre-ordered a special Zoom H1 Handy Portable Digital Recorder (Aff Link) not only for that podcast but for something that I’ve been thinking of doing for some time now, I can’t say what it is yet but will reveal once I actually get something recorded.

Speaking of Amazon Orders I was just alerted that my pre-ordered copy of Attention! This Book Will Make You Money: How to Use Attention-Getting Online Marketing to Increase Your Revenue (Aff Link) by Jim Kukral has been shipped. I intend to read that this week and give a review of it on next week’s Geek Dad’s Weekly Podcast.

3 thoughts on “It’s a Major Award”