In conjunction with Blogs, Brews and Belly Laughs 2 I received a sponsorship prize from Market Leverage so that I could offer an online contest for the online fans of the Speed of Thought Players as well as for fans of Blogs, Brews and Belly Laughs 2. Market Leverage supplied me with a Generation 2 16GB iPod Touch (I don’t even have one of those, what a sweet prize). I ran the contest and gave participants tons of ways to literally earn limitless entries. However, in the end it just comes down to random luck, although you could certainly have improved your odds of that luck being yours. I had a number of people who entered the contest and among them there were 404 total entries. So I listed out everyone’s entries. For each entry I put their name on a list that gave me my initial list of 404.

Then I tweeted out

To which I received a response from @joetech who said the number 24. I responded in a tweet

So I went to Random.org and ran my list of 404 names through the list randomizer 24 times. I stopped at 12 to tweet again just to get a little excitement building.

I resumed my randomizing and so I continued on to randomize the list the full 24 times.

I took my list and then ran the random integer generator and it gave me 237 as the winning number. 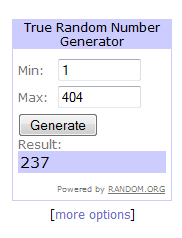 Well 237 was the winning number so I tweeted that out for all to see.

Okay I’ll stop stringing you along, the winner of the 16GB iPod Touch is….

That’s right Andrew Beard was the winner of the 16GB iPod Touch. He goes by @anoo on Twitter.