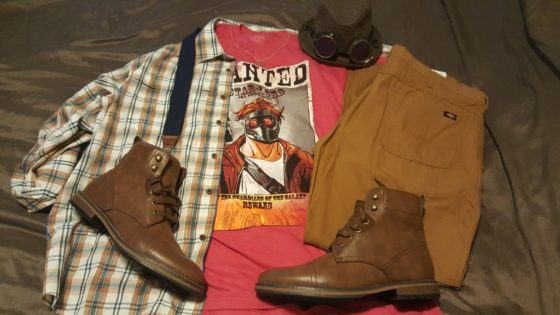 Yesterday I learned that one of the things that I’ll be doing on the cruise during Disney Social Media Moms Celebration is Disney Bounding. I had no clue whatsoever what it was. So, I looked it up. Because adults cannot dress up in costume in the Disney Parks (with the exception of Mickey’s Not so Scary Halloween) people create outfits that are inspired by characters. There are so many really amazing ones that are out there. Given enough time I would have probably found something much better for my theme but I think I did pretty well putting things together in one day. I actually found things to make two different outfits for two very different characters.

I may keep one of my outfits just for the day that we go to Magic Kingdom with the kids. What you see above is for a Rocket Raccoon Disney Bounding inspired by Disney Cruise Lines Marvel Day at Sea. I also see that the outfit could be a bit more associated with Star-Lord, too. The Steampunk Goggles add a nice touch that is more Star-Lord than Rocket, but I seem to recall that there was a scene in the first guardians where Rocket was building something and was wearing welding goggles. I may be wrong, though. Actually, I think I am so I may have to get some Maroon pants and turn this fully into a Star-Lord Disney Bounding, the goggles are more like his helmet. I may have to get some cheap headphones to add to it as well. So, I can turn it into many things, I guess.