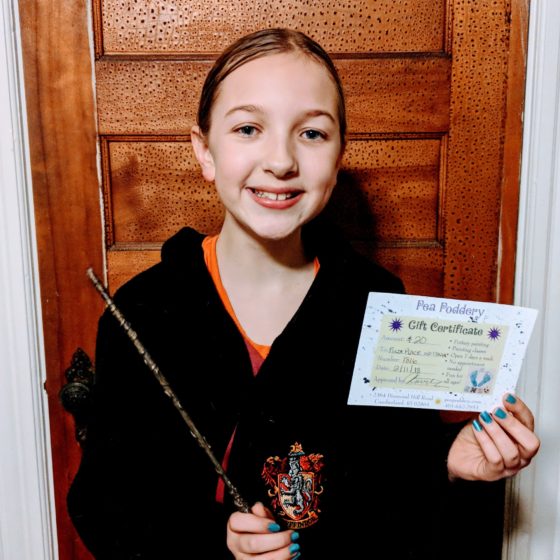 Last night Eva and her friend Maryana went to Pea Poddery to create a special piece of pottery. They were also there for Harry Potter Trivia night. Now, Eva reads Harry Potter almost nightly. She has read the first book several times and then books 2 & 3. She has the illustrated versions of the books and loves them. Even before she got those she read my copies so many times that she actually broke book three.

The illustrated copies of the book are beautiful and I can understand why she’d want to keep reading and re-reading these books. The world of Harry Potter is an amazing one. It has certainly brought out some major creativity in Eva. She writes her own stories and has created her own characters, too. She and Maryana went by the team name, Granger Girls. They were so excited about winning the game. Allison said that they wee squealing with laughter and excitement all the way home. Eva nearly bounced up the walkway when she got home.

Allison told me that she had won last night but not to say anything because Eva wanted to be the one to tell me. When I got home I was ready to be super surprised. she started telling me about the event and when she got to the part where she was going to tell me that they had won Andrew walked in and said, “She won”. I was quite upset with him. Both Allison and I spoke to him about how disrespectful it was to do that. You don’t just steal someone’s moment. It is such a jerk move. We talked all about it together and his lunch note even had a message about such things.