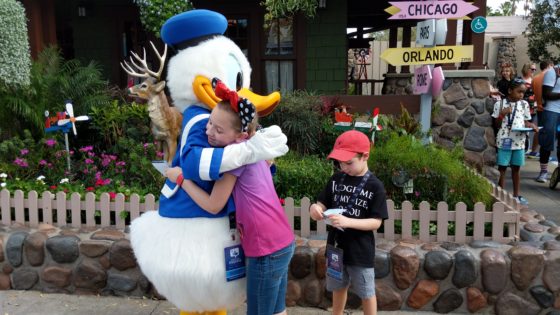 I’m writing this post over a week later because, it was a working vacation. While I was there as a conference attendee and had to be at specific events and sessions it was also a vacation and spending time with the family was the most important thing. So, writing blog posts every day went right out the window. This happened the last time I was at a conference at Disney. But for that one, it took 3 years to finally post up the posts and videos. So, while most of this is fresh in my head I will try and recap this adventure.

This morning we were up bright and early to catch buses to Disney’s Animal Kingdom Park because we had the whole world of Pandora open to us for two hours before the park opened to the public. Pandora has a new ride called Flight of Passage. It is about a year old but is probably the most popular ride in all of the Disney Parks. I know this because the lines have huge wait times but once you fly on the back of a banshee you want to go back again and again. I have never experienced a ride like that before in my life. It was incredible! Eva loved it and so did Allison. Andrew did not, he cried and said that he was terrified. So, he did not opt to go on again. I took Eva for a second flight. We were joined by another father and daughter. We essentially had the whole ride to ourselves. That was crazy cool. There is also a great story to the ride and you really get the experience of being one of the avatars. You are even scanned and then matched with an Avatar. It is very cool how this is done. The seats that you sit on were built like motorcycles and felt very cool with an aggressive riding stance that made the feeling of riding the Banshee even more real. END_OF_DOCUMENT_TOKEN_TO_BE_REPLACED