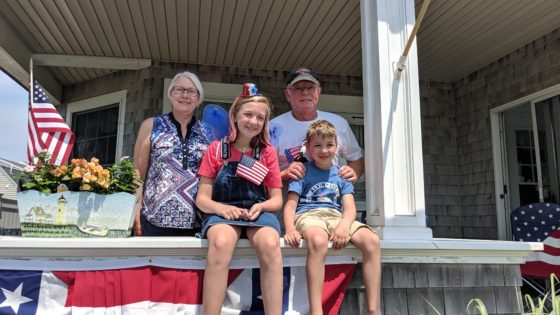 Another great 4th of July in the books. Today was a really nice day. We spent a lot of time on the beach even though it was completely packed with people. It was more packed then I have EVER seen it in nearly 40 years. Dad went out and put down chairs at 6:00am and he wasn’t even close to the first person to do it. There were so many people packed into Falmouth Heights that it was near impossible to move but we enjoyed plenty of beach time. That was mostly in the afternoon.

The morning was a bit lazy and then we went to the annual neighborhood parade. Andrew had been workshopping two jokes over and over that he would tell at the festivities. Each year kids can get up and tell jokes or sing songs. It gets a bit long but it is always fun for the kids. For Andrew he had two jokes, one that he learned from Google. He is always asking Google home for jokes and one that he made up on his own. He did a great job on his delivery and the jokes themselves. He proceeded to tell them over and over to people throughout the day and you could see how he refined them more and more each time he told them. I was impressed. 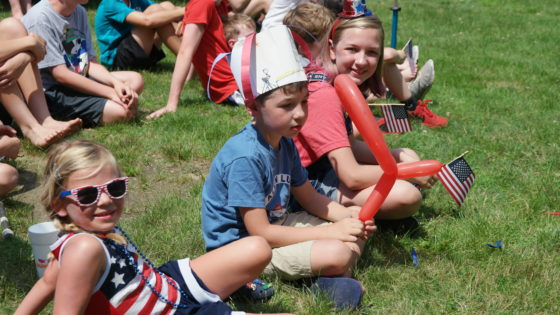 We had family come to visit for the day including my uncle and his girlfriend, my grandfather and my cousin and her daughter and husband. We also had a my parent’s friends and their kids plus one of our neighbors over for dinner. The friends brought a delicious swordfish that they rubbed with Cajun spices. It was fantastic! Dad also got these huge burgers that were a big hit. I couldn’t believe that Andrew wanted to eat an additional sausage after already eating 2 hot dogs and one sausage. I think that getting him to watch the Nathan’s Famous Hot Dog Eating contest and cheering on Joey chestnut to his 12th titles by eating 77 hot dogs may have been an influence. Andrew wanted to have a hot dog eating contest. That kid.

At night we had birthday ice cream cake for my uncle and then we walked across the street to another neighbor’s house and we were able to watch the fireworks from their private beach. It was amazing. The barge was right in front of their house. Most years it is closer to the Casino and this caused some problems for the people on the baseball field who were trying to see the fireworks, they couldn’t. That is too bad but that barge kept moving most of the show so I don’t know the reason why it was so far over but I don’t think it could be helped. It was a boon to us, though. I took my camera over and took a ton of photos. Here is one of my favorites. 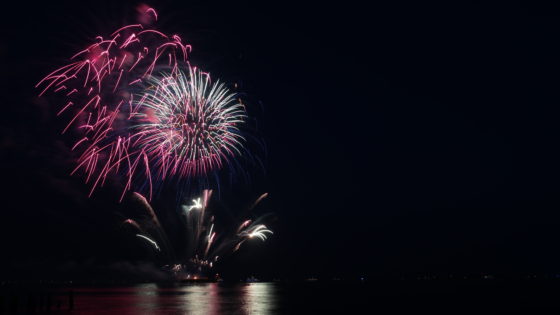