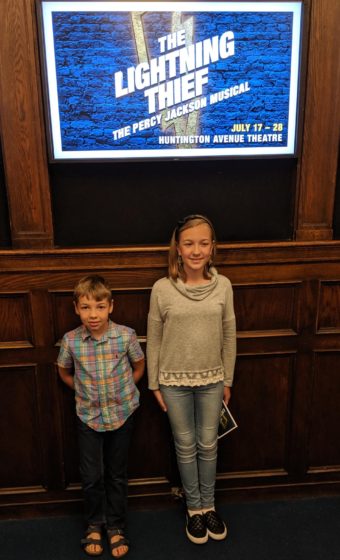 Tonight we had the pleasure of attending a performance of The Lightning Thief: The Percy Jackson Musical at Huntington Theatre Company. This was our first time at this theater and we attended as press. Our seats were complimentary. We were provided 5 tickets so that the whole family could attend. Because it was Percy Jackson I asked for an extra ticket for my cousin who is a huge Percy Jackson fan. She is also Eva’s good friend. She has tried to get Eva to get into the Percy Jackson books. Eva tried the first one and didn’t care for it. To be honest she wasn’t that thrilled to go. She is very strong in opinions once she makes up her mind. 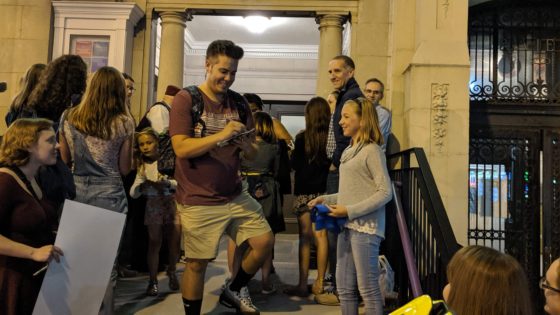 Well, if the photo above doesn’t express how Eva had a complete turnaround on the whole Percy Jackson story then I don’t know what will. She waited to meet several of the cast members and get their autographs. The cast was so nice and each signed her program.

Eva was beaming and smiling like crazy once the curtain fell. She loved the play, and so much of that had to do with the character of Annabeth. She saw herself in this character and it just connected for her. Eva even went and bought a “Smart Girls Never Win if They’re Polite” t-shirt after the show. I know that she is going to come to truly love this series once she gives it a second shot. That is all because of this play. 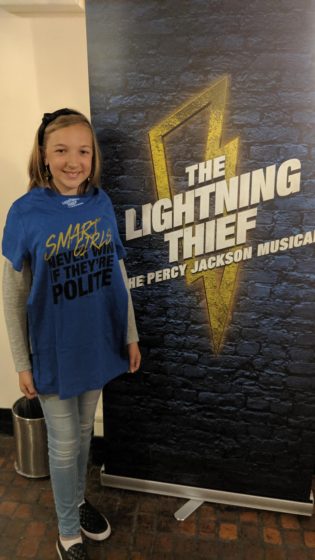 The play is at the Huntington Theatre Company until July 28th. You can get tickets and showtimes by going to huntingtontheatre.org. It was impressive for many reasons. The cast is small and many people perform as several characters. Ryan Knowles was so impressive as Chiron and several other characters. Each one was so distinct and amusing. There are some truly laugh out loud moments with his performances. Along with the cast the set doubled as so many places and in a very minimalist way they made the set work as so much. From an exploding bus to a motorcycle and a large museum the set made use of a couple pieces of staging that when moved and manipulated took on new life. I was so impressed by that. END_OF_DOCUMENT_TOKEN_TO_BE_REPLACED