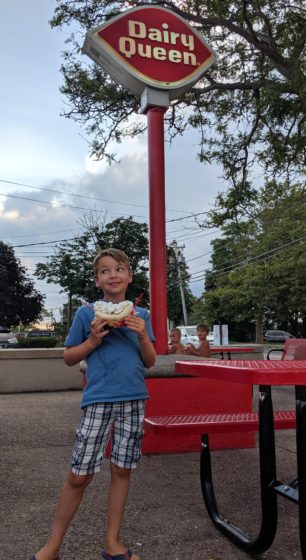 If Dairy Queen ever starts using Dennis the Menace again for their spokesperson/mascot or whatever I think I have a new candidate. I came to the Cape today and surprised everyone. The kids hadn’t seen me in a few weeks and they were thrilled. I took everyone to Paul’s Pizza for dinner because it isn’t The Cape until we get pizza from Paul’s. At least it isn’t for me. While I was down for the 4th of July this was the first time I had had a chance to actually be down for a while. I had missed out on the previous two weeks. I wasn’t there when Andrew had hurt his head and I had not been there to spend time with everyone. I was missing the kids and took an opportunity to get there earlier than expected.

I arrived just as the kids had gotten ready for the beach. After surprising them I took them over and we enjoyed the water. It was a gorgeous day. We did Paul’s for dinner at the restaurant and then went around the corner to Dairy Queen. Andrew ordered a banana split. He says that he got it because I don’t like bananas. I know that it was really because he wanted lots of ice cream. He split the banana split with Allison and by split I mean he ate the ice cream and very little of the banana.

we were going to try and hit the carousel of light too but it rained.It was nice to finally get back down the Cape.