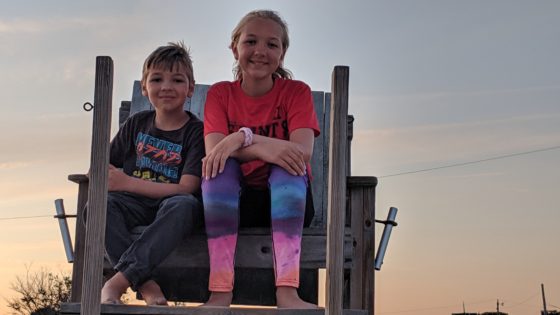 Today was a perfect beach day. The weather was amazing and the water was great. The only thing was that Andrew still wasn’t about to go under the water because of his stitches. He got his stitches out on Saturday but still had a steri strip on his head and the doctor said that he was not to dunk under the water until Tuesday. He was good but we had to monitor closely because he has a tendency to have “accidents” of choices when he really wants to do something. So accidentally dunking was not out of the question.

The kids started with their swimming lessons in the morning and then we stayed on the beach until it was time to go to Science School. They got to spend a lot of time with their cousins and swim with them.

After the beach I drove the kids’ carpool in to Science School. We pick up a little friend of Andrew’s named Evie. I was going to stay in Woods Hole and work on some videos but that didn’t happen. Instead I drove back to Falmouth and got the kids beach snacks for the rest of the week.

When we got home from Science School I set up a tent in the back yard. I had been wanting to do a back yard camp out with the kids for a few years now. I actually got the tent from my trip to Joshua Tree National Park back in 2016. After that trip I was sent the tent and two sleeping bags. They have been down in the basement since then.

We had a nice dinner and then went for a walk down the beach. While we were there we took some of our annual photos. The kids on the lifeguard stand and then dad took one of all of us on the stand. 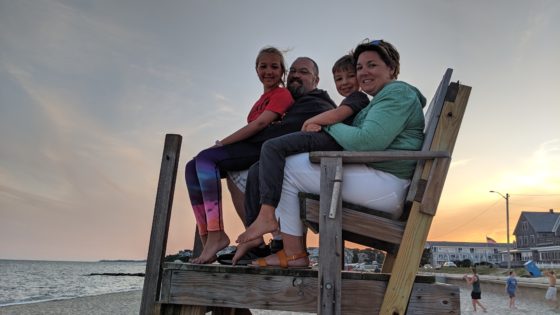 When we got back to the house after our walk the kids and I got into the tent to camp out. First we watched an episode of She-Ra together. Then we went to sleep. About a half hour into that Eva decided that she was going to go inside instead. Andrew fell asleep immediately and slept all night. I slept for a bit and woke up at 4am. Sleeping on the ground was rough. Gotta get an air mattress next time.

I decided to do the camping thing this year because Andrew had his accident and I wanted to spend special time with him. I did not think that Eva would like to do it too but she surprised me by asking to camp out too. Then it was no longer a surprise that when Tara came home Eva decided to go inside.