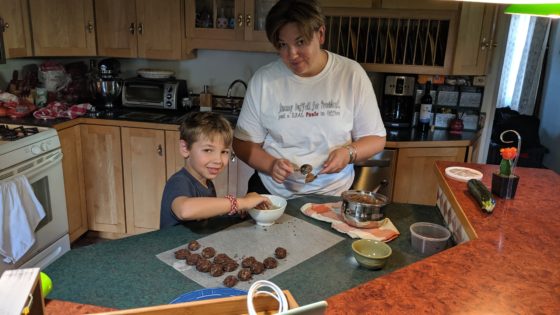 I am not even sure if that is what these are called but one of Andrew’s classmates brought in some chocolate confections on the last day of school. We are calling them Brazilian Chocolate Balls because Andrew figures it is a Brazilian treat because his friend is of Brazilian heritage. All summer he has been asking to make them. He keeps telling us that he can make them because he had them and be pretty much knows what goes in them and how to make them. You gotta love a confident kid, no plan, no direction but is going to get there anyway. Allison emailed the girl’s mother and got the recipe.

The Brazilian Chocolate Balls are made with condensed milk, butter and Nestle’s Quik (I’m old I remember it being called that) or rather Nesquik®. You heat and stir the mixture until it firms up then roll it into balls and into chocolate sprinkles. I did a search for that recipe online and learned that this chocolate caramel (The mixture becomes caramelized) is actually called Brigadeiro and it is a Brazilian treat. Andrew was so happy that we finally made them.

We had friends over for dinner and he was extra special. He cleared plates, offered everyone dessert. Then he must have heard Allison and I telling our friends about how he missed three weeks of karate while he was on the Cape. Well, for each day of karate that he attends he gets a ticket for the start of the year bash. He can use those tickets to play games and more. He can also earn tickets from good deeds that he does. So, he came back out with a paper and pen and started writing them down. One good deed was giving dessert away. At the end of dinner and once he had set aside 4 for the family and one for his Sensei he packed up what was left and gave it to or guests to take home. I think he was extra proud of helping to make this treat and wanted to share it. He really warmed our hearts tonight.