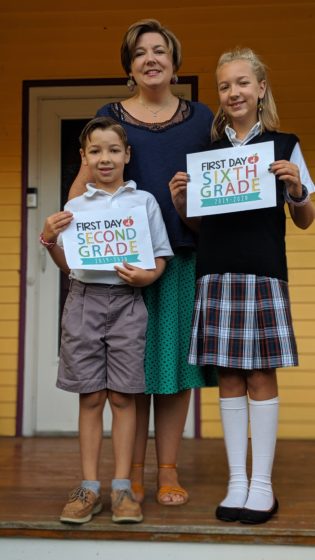 Today was the first day of school for Allison and the kids. Actually, Allison was at school yesterday to work so today is her first day with the kids there. The first week is always a wacky one. The kids go to school for 3 half days. When that happens I go and pick them up. We did some video making in the afternoon. I had a bunch of things that needed to be done and they helped me out making the videos together. The kids had good first days. There may still be an issue with bullying with Andrew. Not him being a bully, him being bullied. It wasn’t so much bullying today than a team being bad sports. They played Math Baseball and Andrew’s team lost, the other team did the “loser dance” from Fortnite when the teacher wasn’t looking. This made Andrew upset. Some of this is him being super sensitive to things and taking it all to heart and some of it is kids being bad sports. I get it. I was bullied a lot as a kid. But it gets better and some bullies grow up to be better people. Some grow up and become even more terrible. Some so bad that their own kids won’t even speak to them. Yeah, I’m Facebook friends with one of my bullies. But he’s blocked from messaging me. Things tend to have a way of working themselves out in the end.

That being said, I do hope that this year goes well for Andrew and for Eva. She’s got a whole new way of doing things in middle school. She’s out of the main building and in the mods. She has a very large homeroom and multiple teachers. She is very excited about all the changes and had a great first day.

Allison arrived home later on in the afternoon and also had a good day. She’s got all new responsibilities there as well. It is a year of big changes all around.