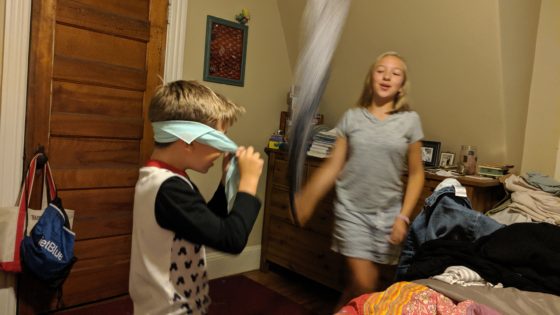 Bedtime around here is a wrangle. Sometimes. The kids are often very easy to put to bed and they still have a fairly early bedtime. On those nights where they just aren’t quite that tired then we get some silly goings on. Or maybe they are the nights when the kids are over tired. Today we went to my friend Sarah’s house for the annual Labor Day party. The kids got to go on a large inflatable water slide. Evea went a couple of times to satisfy us and then she read her book. Andrew went over and over and over again. He had a lot of fun and there wee some moments where he had to stick up for himself but he used his words and expressed what bothered him and did a good job with that. I would have thought that he would fall asleep on the 3 minute ride home but he did not, he rallied and was all sorts of awake after watching a movie, without falling asleep there either. I fell asleep.

so at bedtime he and his sister were all giddy about the next day’s adventure that they were being all sorts of goofy before bed.