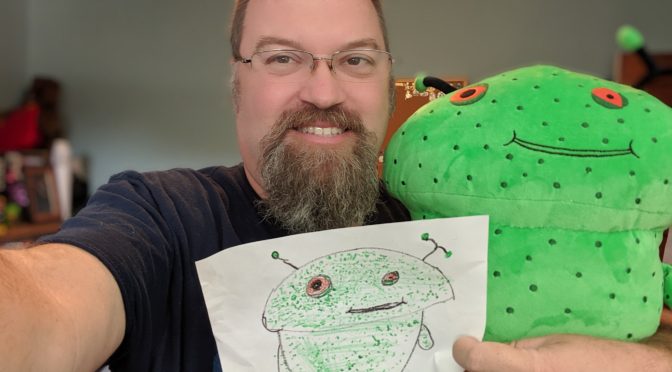 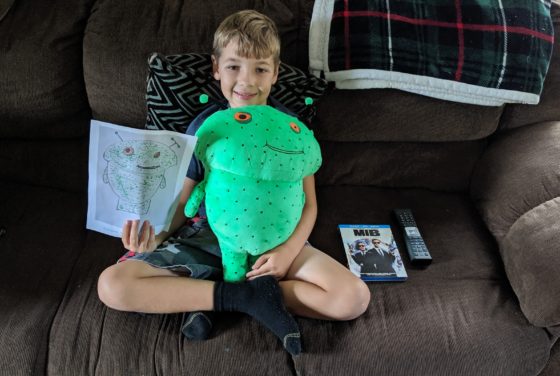 We received a very special package today thanks to Sony Pictures. They partnered with Budsies to provide us with a very special plush. We also received a copy of Men in Black International which came out on Blu-ray today. Below is our experience with the Budsies and also a review of the movie. Opinions are our own.

Back in July we were asked if we’d like to participate in this very special activation for the movie. We were asked to create a full color drawing of an alien. I asked Andrew if he would do the drawing. The Budsies plush would be his when it arrived. Andrew basically made a green squashed potato looking alien but what was significant on it was the markings and the special antenna that split into two. When we received the actual Budsies plush it had that exact look of the eyes, the antenna and there were markings that you could feel all over the plush. Budsies got all the details right on this plush and Andrew was beyond excited to see his creation in reality. When I posted the image above I got some pretty wild responses from a friend. She was all about getting a Budsies made for someone in her family. I learned that Budsies is having a pre-christmas sale right now with 15% off. You can learn all about the process at bit.ly/getbudsies 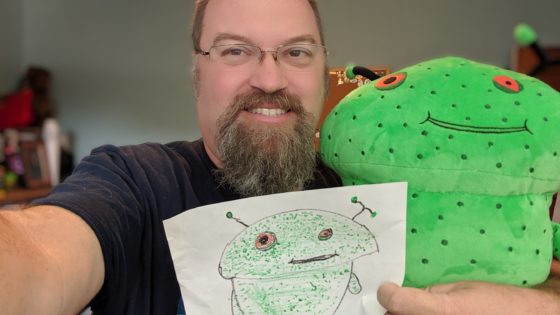 We also received a copy of Men in Black International. I was unable to catch this one in the theater and so it was nice to have a free night last night where Allison and I could watch it together. It was an entertaining story where Chris Hemsworth was Agent H of the London office of Men in Black. He worked with Agent T, or rather High T, the commanding officer of the London branch of MIB. Tessa Thompson stars as Molly. When she was a young girl she had an experience with an alien but her mind was not wiped with a neuralizer. Her parents minds were wiped and so her whole life she remembered an experience that they had not and this drove her to seek out strange experiences in order to somehow find the Men in Black. Eventually she does and she becomes Agent M. She gets paired up with Agent H in order to protect a special alien. When things go sideways they are on a whirlwind adventure to find out the truth behind what is happening. 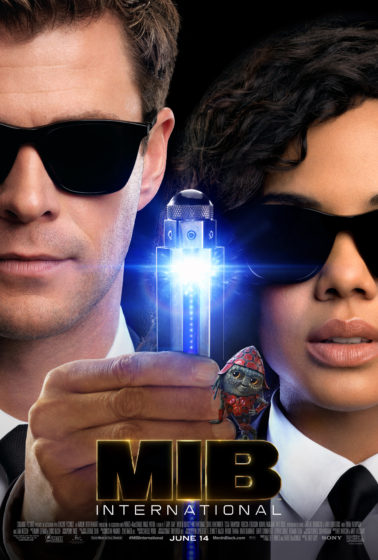 In the movie they meet an alien named Pawny voiced by Kumail Nanjiani and I swear that if Andrew’s alien had red armor on he would look like Pawny’s brother.

there were many subtle Easter Eggs to the original Men in Black movies. This movie continues the mythology of those movies and allows for moving the story to a number of different locations and not just New York City. I’ve always been a fan of the gadgets and so when H and M were fighting the bad guys and pulling all sorts of weapons out of the car it was insane. Just so cool to watch. I enjoyed the movie very much and it is now available everywhere on blu-ray, digital and more. It also have a ton of bonus content including Gag Reel, Deleted Scenes, behind the scenes featurettes and much more.