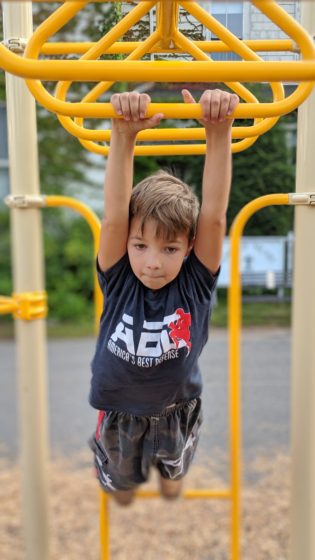 Andrew certainly has a look of determination in his eyes. He knows that he can do some physical things and he wants to show us. I was very impressed with him at the end of Karate today. He is in Black Belt Training and that means that he’s made a commitment to train to become a black belt in his school. This means some extra workouts at the end of class. He’s been training with Kamas, weapons that look like small scythes. He looked like he was off in la la land for much of class but when he had to show what he had learned with the Kamas he did an excellent job. I was wondering where that kid was all through class but glad that he finally showed up.

I think that part of what was throwing him off at class was that he was thinking about the tickets that he earned for the past few months. You see, kids earn tickets at each class and for doing good deeds and more. The tickets can be used at the back to school party. The think is, the back to school party is this coming weekend and we are already going to the Granite State Comicon. so he is going to miss it. He can take all his tickets and put them into raffles for toys. He can also use the tickets to go to events at the school like a Parent’s Night Out. Well, I talked to him about using his tickets for a Parent’s Night Out. It isn’t something that we can afford to send him to and the only way he’s going is with those tickets. He was reluctant but agreed. He knows that I get tons of toys and so there is no reason to be upset. But he got upset during class because he was using almost all his tickets for the Parent’s Night Out Nerf Party. We talked about it and agreed that having the experience of the party was much better in the long run then having the possibility of winning a toy that he’d get sick of in two days. He showed a lot of maturity once we talked it out.