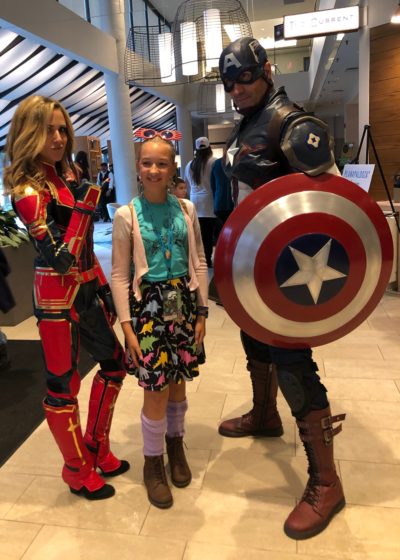 We were invited by the creators of the Granite State Comicon to come up as guest of the convention. Prior to the convention I promoted the Comicon and even gave away a set of family passes.

The Granite State Comicon was created by the founders of Double Midnight Comics. This year they celebrated with a very Teenage Mutant Ninja Turtles heavy theme because it was the 35th anniversary of the creation of TMNT. They had all four of the original voices from the cast of the original cartoon. They even had Kevin Eastman there to give a talk as well.

We drove up from home this morning and got to the DoubleTree just about 10am when the doors opened. We picked up our badges which were spectacular in themselves. Probably the best badges that I have ever had at a conference. They had original TMNT art on them! We walked around a bit and got oriented. We went over to where they had a mini kids con and there they also has Southern New Hampshire University there with their eSports team letting folks play several of the games. We played Super Smash Bros as a family and had a great time. I wish that they had eSports around when I was in college because I definitely would have tried out for the team. SNHU also has several classes in Game Development and art. Wow, that is incredible. Again, I wish that was an option as a kid. 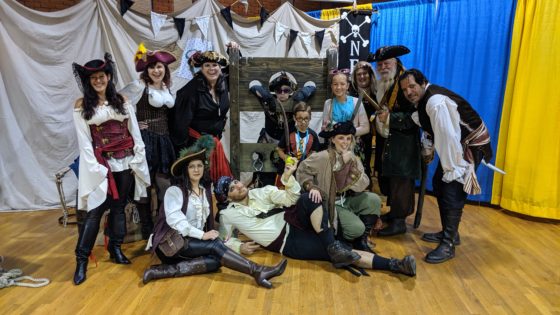 We also battled pirates, the New England Brethren of Pirate. These folks set up a booth and let kids battle them with giant foam swords in exchange for a donation that went to the Manchester Boys and Girls Club. There were many organizations collecting donations for the official show charity. We were happy to donate and the kids had so much fun. 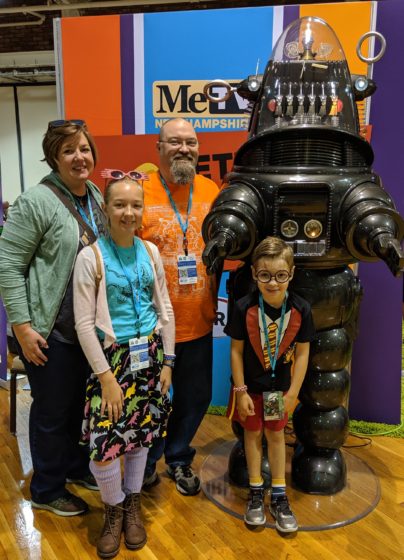 WMUR the local station had a booth too with retro toys and video games and even a couple of robots. The robot from Lost in Space and the one from Forbidden Planet. The kids liked this booth and Allison showed them how to use a rotary phone. Crazy!

The kids also took an art lesson from Emily Drouin of EPLIS Comic Series. They enjoyed this very much and each drew three characters. Emily and her husband run Kids Con later on this Fall. I wish we could go but we cannot.

Next we had a treat to see Rob Paulson speak. I was moved to tears by what he said and the humility and compassion of this man just hit me. I was already a huge fan but being there listening to him he became a hero. He was so inclusive to everyone and part of his session was done with Adam who is the creator of Calmer Con. It was another part of the convention that I actually did not experience. This is where kids and adults with sensory sensitivity could go for a convention experience but it was quieter and more sedate for them. I should have checked it out to see it first hand and learn more about it. Everyone went to Rob’s session. The kids did well sitting and listening but they weren’t up for a second one so I went to the Kevin Eastman session alone.

Kevin went over the history of the turtles from their origin in Dover, NH to today. He spoke his mind about what he thought was the best as far as movies (The first one) and Casey Jones (Elias Koteas). I thought Elias was spectacular as Casey but Stephen Amell was the bright shining part of the second Bay-Turtles movie. But no one can do Casey Like Elias did Casey. 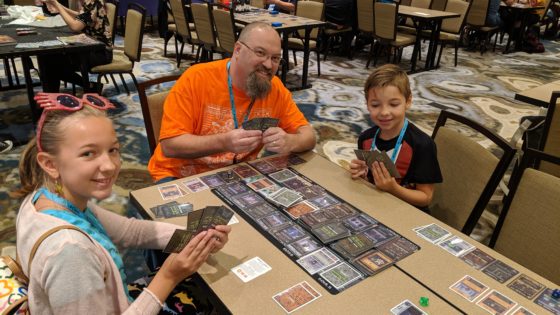 After Kevin’s session we were able to check in to our room. I checked in and then took the kids to the Gaming room. Allison went to relax. In the gaming room we played a game that I very nearly brought with me called Boss Monster. We learned to play the game and cannot wait to play it as a family. I think we need a weekly game night.

While we were in the Gaming Room I met Doug from Victory Condition Gaming and I purchased a game called Tiny Dungeon. It is a quick way to get into role playing games with the kids. I am excited to play that, too.

We went upstairs and chilled out for a while. Then we drove onto South Willow street and went to C.J.’s for dinner. Allison ran into someone that she grew up with and we had a great meal. Then back to the hotel to get some sleep because the next day would be a busy one. When we returned we got on the elevator with none other than Kevin Eastman and his wife. I was tongue tied but managed to tell the kids that he was the one who created the turtles!! Allison was asking me for the next 20 minutes if my breathing had gone back to normal.