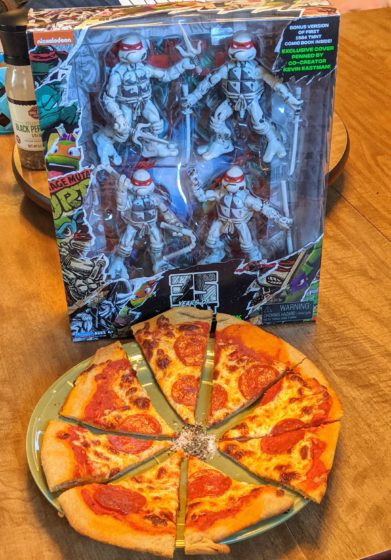 I missed National Pepperoni Pizza day yesterday and I had the perfect thing to go with it. While I was at Granite State Comicon I heard about the 35th Anniversary toy set that Walmart was selling. This is a great set that has the original turtles in their original black and white comic book form. The only thing added were the red bandannas on the turtles. The set also has the first issue from 1984 with a new cover done by Kevin Eastman. It is an amazing set and I can’t bring myself to ruin it by opening it. The box shows so many of the different iterations of the Turtles too. It looks amazing.

Allison made the pizza and it was great. Next year I’m going to have to figure out the right day to celebrate that pizza day.