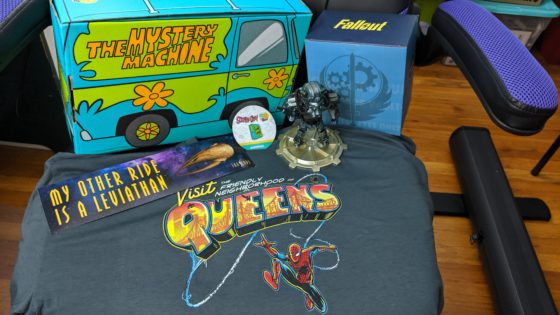 The July 2019 Loot Crate arrived at my home the other day. I guess that makes sense because the June 2019 one arrived back in September. I don’t get it. They keep sending them to me for free and I enjoy unboxing them.

This crate was titled Journey. Inside were items from Scooby Doo, Fallout, Farscape and an Aquaman Challenge coin that I think was from an earlier crate that I got but didn’t get the coin in that crate. There was also a nice tshirt inside that was Spider-Man related. I liked that one a lot. I think that when I like the tshirt I end up liking the crate overall. The crate also turns inside out to become the Mystery Machine from Scooby Doo. There was a Scooby Doo blacklight poster that looks really weird in the video because of the Green Screen. Check it out.