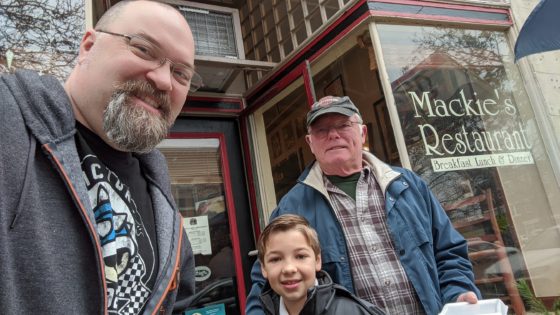 To celebrate Andrew’s eighth birthday we went out to Mackie’s for the birthday breakfast. My dad takes us out on our birthdays and I started doing that with my own kids. Although, he ended up taking us both out this morning.

Andrew was funny, he tried a whole bunch of different jellies on his toast and then on his shirt and pants. Can’t take the kid anywhere but he has fun. He also ordered Hot Chocolate and when it arrived it had about 6 inches of Whipped Cream on top. He loved digging his spoon into the whipped cream and eating it. Then waited until the Hot Chocolate was lukewarm. I said that it was basically chocolate milk and he got all upset. He doesn’t like chocolate milk. When he was born he had a milk allergy and never developed a taste for it. Not even for chocolate milk. I did not realize that this statement would upset him so. I had to reassure him that it was not, in fact, chocolate milk. However, if they made it with milk (which they most likely did not) it was chocolate milk after-all.

I dropped Andrew and Dad off and then went home for a Twitter Party. Once that was over I was finishing up a few things and Allison texted me to let me know that people who were supposed to come and help out in Andrew’s class had to cancel. I headed back tot he school and helped the kids make some Native American medallions in their centers. Andrew was surprised to see me there. The kids had a nice time making all sorts of things like totem poles, dream catchers, medallions and turkey hats for Thanksgiving. 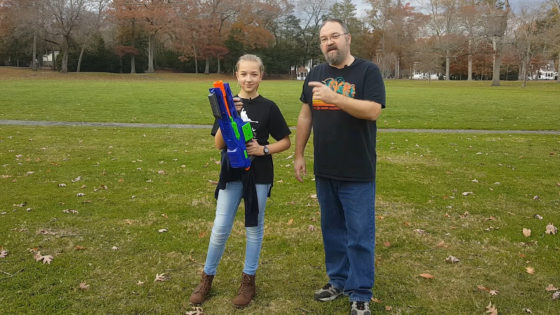 Prime Time Toys sent us a free package of several of their Dart Zone blasters to include in our Holiday Gift Guide. Opinions are our own.

They sent along The Destructor, Commando Iconic 4 and The Scorpion . You can find all of these at Target (not affiliate links). The blasters are rated for 8 and up.

We had a lot of fun with these. Andrew still is unable to actually cock one of the blasters but he can use the scorpion or Destructor quite easily. It is also way more satisfying to pepper dad with tons of darts at once. You can see these blasters in action in our video below.