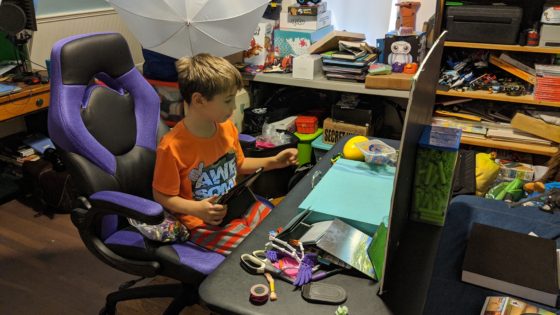 I woke up a little early today and found Andrew in my office working on a stop motion video. He received a special LEGO movie making set for his birthday, it was a Klutz style set that came with everything he would need to work on a stop motion LEGO style video. He’s learning how to make them using Stop Motion Studio. He has a lot left to learn and doing this with an iPad is tough because he keeps moving the iPad instead of motion everything else. I didn’t get much time to help him out and show him a better way, though. But, since he is interested maybe we can work on this project a bit together.

Eva also worked on some stop motion stuff, too. She used my Modibot figures to make her movie and she says it is about a minute and a half and she can’t wait to show me.