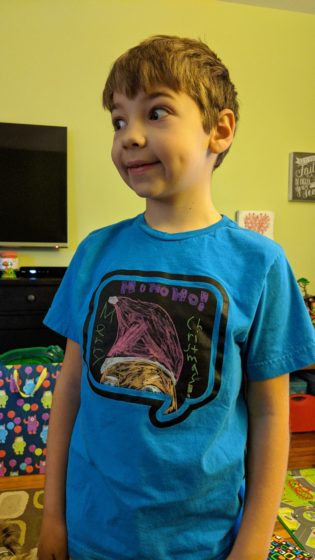 I wanted to take all the Christmas is for Kids toys to the drop off location on Monday but Monday was such a rough night. It was pouring and I just did not have the energy to going and bring everything out to the car in the rain after I had taken everything up from the basement earlier in the day. I was getting over something nasty and wanted to rest. We did manage to take the photo on the stairs on Monday night but that was about it.

I asked the kids to wear something Christmas-y for the photo and Andrew took it upon himself to take his Chalk of the town tshirt and draw Santa partway down a chimney. I set the shirt aside after the photo and he was going to wear it again when we went and delivered the toys. I ended up delivering them myself the other day but this morning when the kids saw that it was Dress Down for a Dollar day Andrew went to get his Chalk of the Town tshirt to wear. I took a few more photos of him in it today. It is so hard to get him to look over at me. He just wakes faces in all directions.

Chalk of the Town Gave us these tshirts and markers earlier this year as part of a campaign. I’ve been using them for so many things and so have the kids.