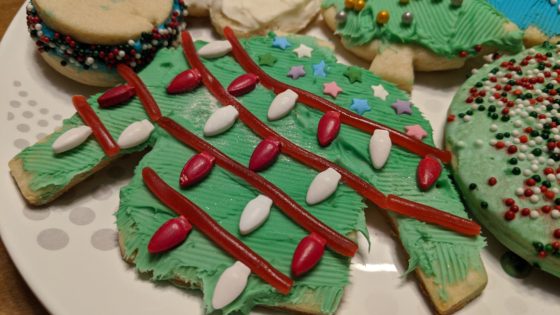 Last night the kids had a babysitter while Allison and I went to a Christmas Party. We have such a great babysitter. She planned on decorating cookies with the kids and so she made them from scratch and also brought frosting and more. The kids had so much fun. We are very lucky to have such a special person in our lives. She even got both kids gifts and wrote them each special notes. We are really going to miss her when she goes to college. 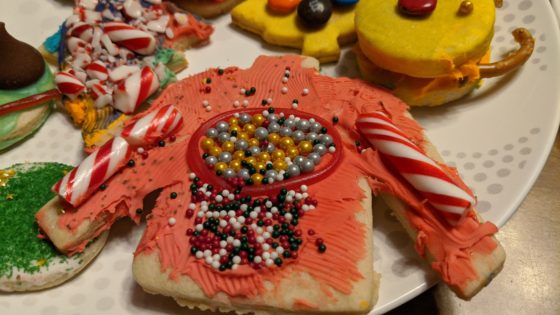 In addition to making the cookie dough she brought over a bunch of cookie cutters and the kids made so many different cookies. They were quite proud of their decorating. 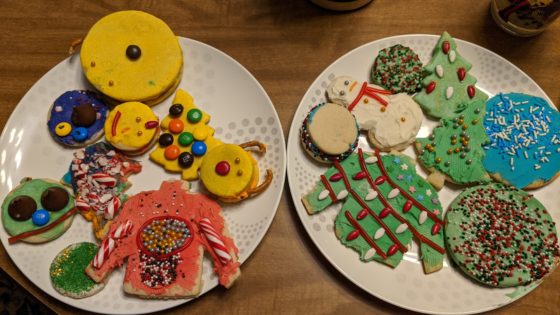 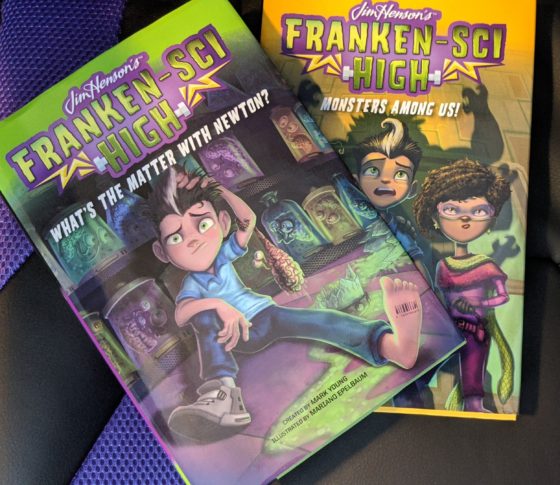 I received two free books from the series Jim Henson’s Franken-Sci High from Simon Spotlight. Opinions are my own. This is part of my “Read to Me, Dad!” review series for parents to help them find great books for their kids.

I enjoy books with good mysteries. I also like when a series doesn’t wrap up everything int he first book. Franken-Sci High has a great mystery around the main character, Newton Warp. The kid wakes up with total amnesia in the brain room of Franken-Sci High. He has a student ID with his name and a barcode on his foot. That’s all we know about him to start off. Slowly we learn more as he becomes friends with fellow students Shelly Ravenholt and Theremin (a robot). We learn that the school is in the Bermuda Triangle and it is a school for the children of Mad Scientists. That way they are protected from the outside world and the outside world is protected from their experiments. Here is the official description of the school.

“Franken-Sci High is the ONLY school in the world for aspiring mad scientists and it’s located on a craggy island in the Bermuda Triangle, of course! The school was founded in 1536 as a refuge for generations of brilliant—and yes, eccentric—young minds. Students are encouraged to use their brainpower for good, but the teachers accept that some kids will still want to take over the world…and the school cafeteria.”

Here is what I thought of the books.

Would you like to win copies of the books? Enter through the rafflecopter app below.

Official descriptions of both books.

In the first book, What’s the Matter with Newton?, Newton Warp is a mystery, even to himself: He wakes up one day in the library with no idea of who he is, how he got there, or where he came from. Newton is quickly assigned to a dorm and makes a friend: Shelly Ravenholt, who creates living, breathing monsters for fun. He’s eager to find out who his family is, but this is high school after all, and he soon has other problems: Newton has to create a last-minute project for the Mad Science Fair and Shelly’s friend Theremin (a robot) is really jealous of him. And that’s not all: the other students at Franken-Sci High soon realize that Newton has a few useful, but surprising quirks. Wherever Newton came from, they start to suspect that he’s not entirely human!

In the second book, Monsters Among Us, Newton Warp’s friends notice he’s being followed around by a strange new professor, Dr. Flubitus, but have no idea why. Newton wonders if it has something to do with the barcode on his foot. He doesn’t have much time to dwell on it, though, because soon there are reports of a giant monster loose on campus! Shelly assumes a school for mad scientists would have top-notch security against monsters, nosy tourists, and other invaders, but soon she and her friends Newton and Theremin discover a gaping loophole in the system. If a marauding monster can find its way to the school’s secret location in the Bermuda Triangle and figure out how to open a portal to the campus, anyone else could get in, too! Then Shelly finds out she might be the reason the monster is there in the first place…