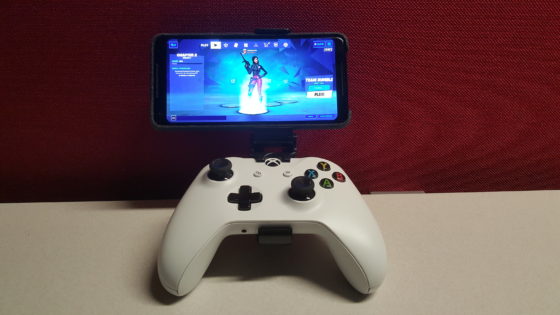 A while ago I won a Glap bluetooth game controller. It wraps around your phone so that you can play games using a control pad instead of your screen. I used that to play some Fortine a couple of times but didn’t like the way the controller worked.

I recently got into the XBox streaming service beta and had to get a clip for my Xbox controller so that I could use my phone and my controller to play the Xbox streaming games. I played a few but instead use it to play Fortnite because that is what I needed when I was not at my Xbox console. I was away for Thanksgiving and wanted to keep up with all the daily Medal Punchcards. That gets me lots of experience points and I didn’t want to go losing out on that. So I can play anywhere now. Got a bluetooth headset too. It isn’t perfect. there are times when there is a ton of lag but for the most part it works well. I even found that my aim is way more accurate on the phone. I will have to compare the controls to that of the console when I can play again on that.