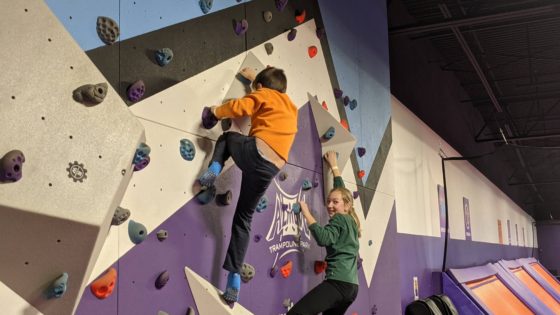 The kids had a half day today and so I picked them up from school. I took them to McDonald’s for lunch. On the way there Eva asked if she could order off the actual menu instead of getting a Happy Meal. She wanted to try something new and today she got her first Big Mac. She liked it, too.

The school had a fundraiser happening at a place called Altitude. This was an indoor trampoline park. I brought the kids over so they could play with their friends for an hour and a half or so. They had several different jumping areas as well as a dodgeball court. I was very impressed with the kids rock climbing abilities. Both Eva and Andrew did great jobs on the rock wall. Andrew had no fear as he climbed and then let go and fell into a big pit of foam blocks. He’s got no fear.

I was working on videos in the office today. It always seems like things are quiet when I am not recording. However, once I start the camera the noise starts up. Last week there were trees coming down and so the whine of the chainsaw would interfere with the videos.

Today I was making videos and there was the sound of beeping from a truck backing up. The sounds were right outside the window. A new dumpster was being delivered to our neighbors. This was the second dumpster delivered to this house in the past few months. They absolutely need one these, too. There has been a huge mound of trash in the backyard and garbage all over the place. Did the dumpster solve this issue… nope.

Apparently there was a bunch more trash in the house and the neighbors started throwing things out including throwing things from the second floor into the dumpster. I watched for a bit and caught the loudmouth leaning out the window about to throw out some blinds. He missed the dumpster and they practically exploded everywhere. So I figure that bits and pieces of that will remain on the ground for the next several months.

they’ve also had a tractor trailer parked in the driveway and it got filled up with things from one of the apartments. That was moved today, too. More beeping. At least I was just making quick video game videos. But still. Every time I start filming.