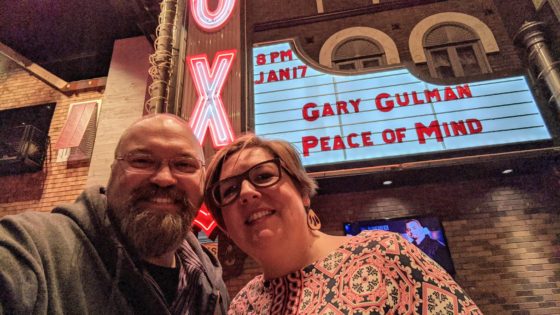 I gave Allison tickets to see Gary Gulman at Foxwoods as part of her Christmas gift. We are fans of his from way back. However, we’ve never seen him LIVE before. I was so excited to get there and see him. We drove down after school and had a nice dinner at Stony Creek which was a restaurant right next to the Fox Theater.

While we were there they had an acoustic singer. He played a whole bunch of songs and they were done well. It was a nice meal and the atmosphere was fun. Allison had a flight of beers which she enjoyed. The setup there was weird. You had to go to the bar to get drinks and then you had to order food at another window and wait till it came back and then you got a text saying it arrived. The food was good, though.

After dinner we walked over to the theater and got our seats. We ended up in nearly the back row but the theater is a nice intimate one. Gary had a friend as the opener. She was pretty low key. I had not heard of her before and she was okay. The vibe did not really fire us up, though. Gary came out and he started off a bit low energy, too. However, as the show progressed he had some really great stuff. He had Allison rolling at one point. I know I was laughing out loud several times. When the show as over Gary announced that there would be a meet and greet. I did not know that he would be doing that and I was happy. We headed downstairs and waited in line to meet Gary. He was really nice to chat with us and take a photo with us. 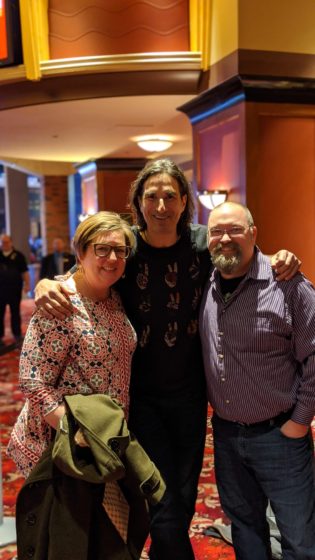 When we got home I learned that this weekend would be a free HBO weekend. Gary has a new special on HBO called The Great Depresh. Allison and I will watch it on Sunday night.