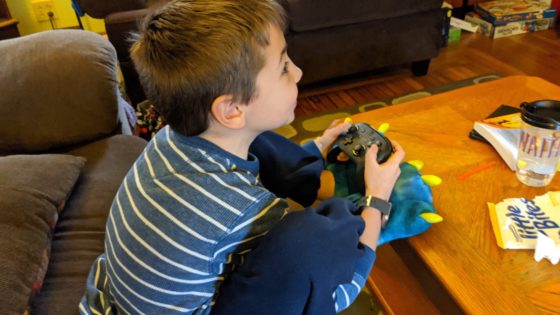 I came home from work today to a sick kid. Andrew had a fever yesterday and so he could not go to school today. I checked his temp all through the ay and it would go up and down. He was in good spirits, though and so pretty much a normal kid except for the temp going up and down. He spent the day watching some tv, reading and playing Minecraft. When I woke up from my quick nap after work we played some Super Mario Odyssey on the Switch in the living room. He was Mario and I was Cappy. I’m not a fan of being Cappy but when the kid wants to play with me then he gets to be the character he likes. I looked over at him as he played and saw that he was all tangled up like this and still playing. That is one thing that he and his sister do often, they can contort themselves like pretzels. Must be nice to be so flexible. I can barely get into a cross legged position for very long.