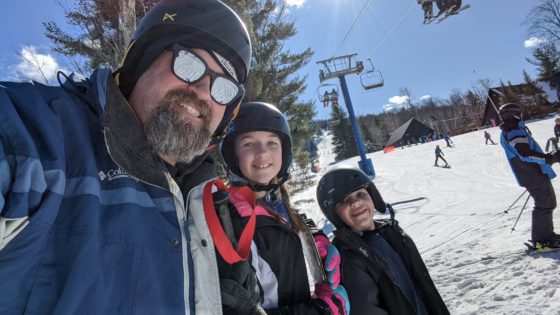 I took the kids on their first skiing/snowboarding trip ever. Our parish had a bus trip to Pat’s Peak. I went as a chaperone for the trip. I’ve been part of the Youth Group planning team and went to get my face in front of the kids in our churches. I’m not sure if I really accomplished that too much but I did have a fun time with the kids.

We had the kids enrolled in lessons and they both tried out snowboarding.

the day started out rather rough for Andrew. He got frustrated with snowboarding and was near giving up. I had stuck around to watch the kids in their lesson and try and get some photos. It was hard for me not to completely step in and give him an out. But I knew I couldn’t do that so quickly. An instructor got him going again and once he got up the hill on the Magic Carpet and then came back down the hill he was happy to keep trying. The thing that Andrew did not like was walking with the board. He kept falling and falling. Then he figured out his own way. Instead of taking one foot out of the board and walking he would crawl, shimmy and shake and get to the magic carpet while staying attached to the board. He’s nothing if not persistent in finding his own way to do things.

Eva got the hang of things a bit quicker. They both fell a lot but they both got back up. That is the most important thing.

I went off from time to time to take my own runs. I’m pretty sure that I haven’t been on skis in about 15 years and I was able to pick it right back up. I knew I’d be sore the next day, though and I had Krav class to go to where I’d have to do a lot of moving around. I had some nice runs and turned in once I had enough.

Andrew rode up and back with me in the bus. He had some things to entertain himself. Eva rode up on her own seat by herself but she was fine with that, she had a lot of stuff to keep er occupied. However, on the way home one of the other chaperones asked if he could switch seats with me so that his son could play Magic the Gathering. I told him that Eva wanted to learn how to play that game. We had played together before and we just don’t know that much about the game but this kid did and so I suggested that maybe he teach Eva. They had a great time together. They played until they got bored with that and then shared some earbuds to watch Captain Marvel. She’s still talking about playing Magic.