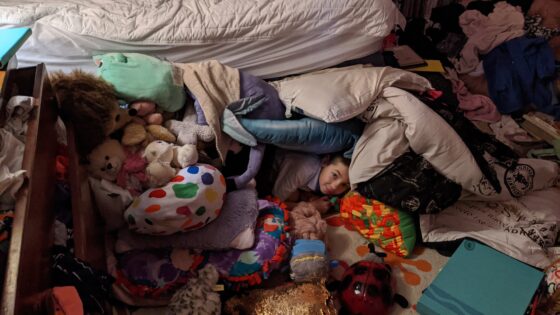 My son is growing up. Sorta.

I have noticed that he has been starting to mature in some ways and is as playful and immature as ever in others. For instance, the photo above. Eva cleared everything off her bed to change the sheets and Andrew hid in the stuffed animals E.T. style to scare her. It worked.

Then we come to Karate. He’s still got a big old wiggle in his step all through class but when he learned that he may be in danger of not progressing to the next belt he began to really dig in and try very hard to keep his focus in the classes. His instructors have been fantastic and have helped him remember that focus and to help him when he starts to slack on technique. He’s showing his maturity in that he recognizes that he’s got to work hard to continue to achieve in this program.

As all of this is happening Andrew has decided that he will be going by Andy from now on. He likes how it sounds and wants that to be what he is called. This is going to take some getting used to for everyone. He’s been Andrew for eight years and I know I’m going to be catching myself over and over again. It’ll take some time and I hope that he’s going to have patience with us. I did tell his Karate teacher but I said not to call him Andy until Andy tells him that is what he wants to be called. He’s gotta speak up for himself in this.