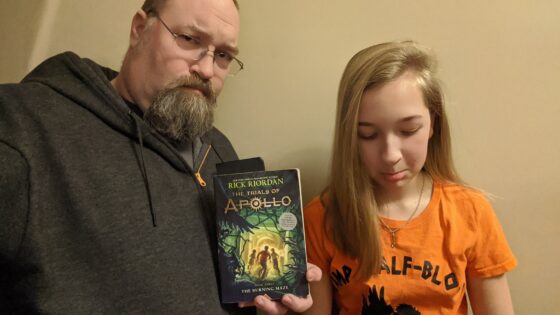 Eva is the big time reader in our family. She has been reading all the Harry Potter books for years and she was resistant to reading the Percy Jackson series. Then we went to see The Lightning Thief The Musical almost a year ago. Once she saw the musical she feel in love with the character of Annabeth. Then she dove head first into Rick Riordan’s world of Greek and Roman demigods.

I had read the Percy Jackson series and started the second series with all new characters as well as those we’ve come to know and love. Once that was finished we started the third series called The Trials of Apollo and this is where Rick really threw us and emotional knuckle-ball. I had been listening to the 3rd book through Audible as Eva read the book. I was ahead of Eva and I learned that a major character dies. I had to prepare myself for when Eva read that chapter. She read the chapter this morning and stopped reading the book. She had to leave it alone for a while because she was quite sad about the fate of the character. When we discussed it together she has decided that this series doesn’t count and that the character is happy and alive. If only.