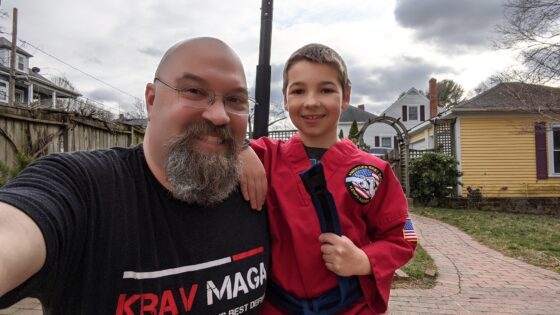 Andy and I finished our stripe tests for Karate and Krav Maga. Because everything is being done form home now so was the stripe test. It was a little weird to do it from home but this morning Eva helped me with my gun defenses. I really felt weird about doing those with her but the alternative was to do them with no attacker and that felt even weirder.

I submitted my test today and Andy’s yesterday. We each passed out tests. andy will be moving on to his Green Belt but I missed one stripe test prior to this one and did not earn my second stripe. So instead of earning out belts at the same time we’re going to be a bit out of sync.

Yesterday I was showing Andy the requirements for stripe test before we went out to do them and we got a Facebook call from our Sensei. Sensei Wilson called us out of the blue. It was a really nice thing for him to do to check in on us. The entire school has been excellent in keeping everyone motivated while in isolation. They’re going to have friday chats with sensei and live classes next week. I am looking forward to that. It seems that schedules in isolation are getting as varied and busy as regular ones.

So, after I learned that I earned my stripe I had Andy come out to the back yard and we gave each other stripes. I was glad that I had some black electrical tape hanging around.