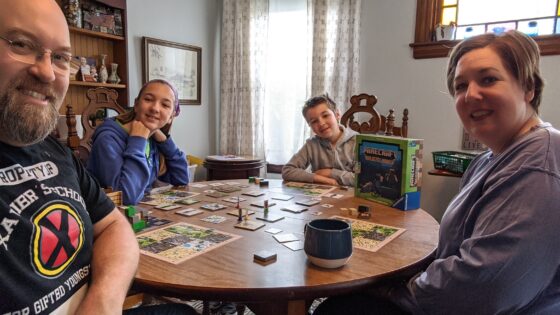 We received a free review copy of Minecraft: Builders & Biomes from Ravensburger. Opinions are our own.

This afternoon we decided to give the family board game, Minecraft: Builders & Biomes, a try. The kids love playing Minecraft on the Nintendo Switch and Andy watches Minecraft videos so that he can learn how to make different things. I simply do not get how to play the game. I can play all sorts of video games but for some reason Minecraft a game I can’t get into. Luckily, you don’t have to know anything about how to play the video game in order to have fun and play this family board game. 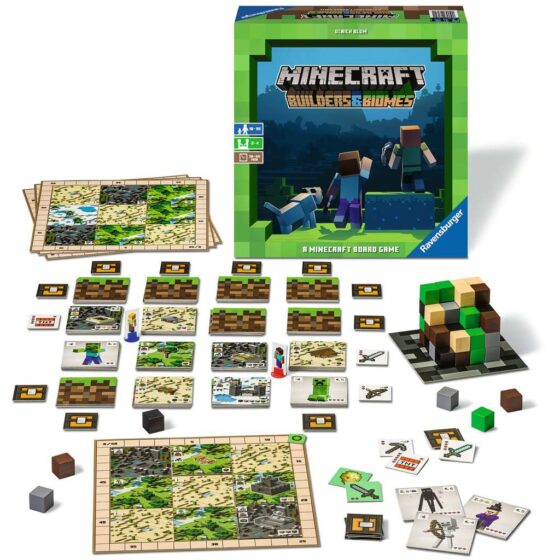 We set up the board including 64 wooden blocks and 64 building and monster (mobs) cards. You set up the wooden blocks at random into a special frame that makes stacking very simple. When you remove the frame then you have a cube of block for players to mine from in order to build. You also lay out 16 weapons cards. Each player gets some weapons and cursed potato cards. Each player gets a character, character skin and stand plus an experience token. There are also scoring cards for each round of scoring and instruction cards so that you know what sort of moves you can make each turn.

On your turn you can do two different things. You can choose to mine two blocks from the resource cube. You can choose to move 0-2 spaces on the board, you can build something if you have the resources, you can pick a weapon if you are near it or fight a mob is you are near that. It was pretty straightforward on how to play but we did have to remind Andy a few times that he could only do two different things on his turn. He eventually got it with some help.

There are 3 rounds of scoring in the game and each round you have to change your strategy a bit or really develop a strategy from the beginning. The game took us well over an hour to complete but it was our first time through and we had to go over the rules several times to make sure that we were playing correctly. However, in the end I believe that we can play a quicker game and only have to refer to the rules for scoring purposes. The game was very easy once we got going. Although it was for ages 10 and up Andy had little issue playing. He picked up very quickly and he identified all of the mobs for us as we played. He knows his Minecraft.

If you are interested in picking up this game you can do so through our Amazon.com affiliate link. At the time of this posting the game was on sale for $29.99.