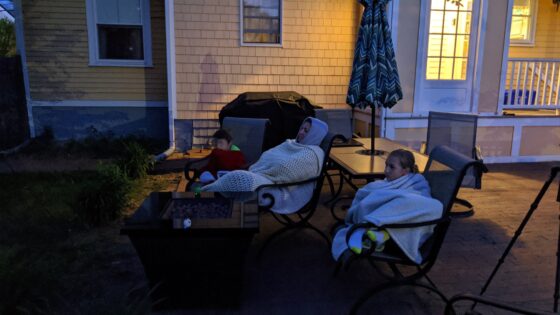 A few factors came together to influence my decision to purchase a giant screen for the back yard. First and foremost is that the terrible neighbors that lived next door and who would should obscenities at all hours have been removed. I am hopeful to see who moves in after that building has been completely renovated. A whole lot of work has been going on there. It is quality work and I hope that quality people move in. The other factor is that we’re going to be home a lot more often because of the pandemic and there are no open movie theaters.

I bought the screen from Amazon.com and while it was a bit pricey it goes up and comes down very easily and the picture looks great. I was even able to get everything back into the bag when all was said and done. The screen is 120 inches and it the screen snaps to a large light frame. There re ropes to tie it down in case of wind, which we had but it stayed up.

In order to play our entertainment we used our Cinemood, a small portable projector for kids. This is a pretty powerful product, though. I received it several years ago as a review and am only now taking full advantage of it. The light inside is strong and it projects a nice picture. It also has bluetooth and can be controlled by an iPad. I was able to connect two My Audio Pet mini speakers to the Cinemood to get big sound. Netflix and Amazon are both built into this device so we can choose movies from those platforms easily. I think the only real issue is having it dark enough outside to really enjoy this. We went outside around 7:45 or so and had to keep the Cinemood close to the screen for a while until it got darker, as it got darker I would move the Cinemood further away in order to make the picture larger. By the end of the screening the picture filed the entire screen. 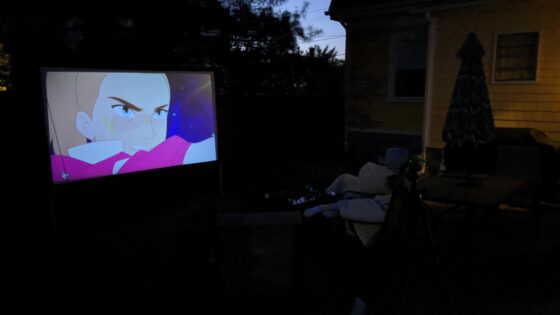 We watched the last 3 episodes of She-Ra and the Princesses of Power. This was a fantastic series that both kids enjoyed very much. It was nice to share this with them. The show is one of friendship, inclusion, and he power of being unique. Eva was so excited for the finale that we were a bit concerned that she would not sleep afterward. Luckily, she did.