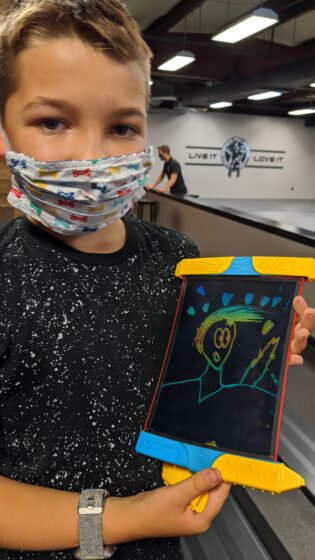 In the photo Andy has drawn a character from The Last Kids on Earth, a book series that we have been reading together and now a show on Netflix. We were at Eva’s Jr. Krav class today and I had asked Andy to please bring a book with him so that he could read while we were at the class. Instead he brought his boogie board (must have rediscovered it during the room move) and drew pictures for me to guess what he had drawn. Then when he got tired of that he asked me for suggestions and so I gave him Jack from The Last Kids on Earth.

Andy’s Futon mattress arrived a few days ago and tonight he had Eva over for a sleep over. We did dinner and then watched the movie Feel the Beat on Netflix. Then let the kids stay up an additional half hour playing with the new Playmobil castle. We said prayer with the kids and went back downstairs to watch our shows. When we came up around 10pm I checked in on the kids and Eva was awake. Andy had fallen asleep probably moments after prayers. That is what he does, he goes non-stop all day long and then crashes out hard. He was so happy to have his sister stay over in his new room, though.