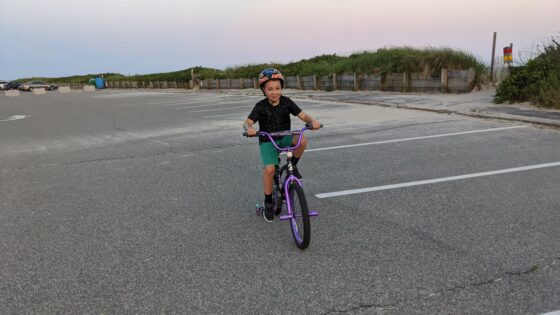 We went to the Cape today. Stuck in about 2 hours of traffic on the ride down. We usually go at different, more off, times but today we got stuck in the mix. This means that there are going to be many, many people on the Cape. We’ll have to switch things up a bit to protect ourselves from the general public. Social Distancing is out the window unless we do it ourselves. So, it means going to the beach before the crush of people descend upon the space and disregard any and all of the posted rules for being at the beach. So, that will be an adventure.

Last week when we were down Andy was riding his old bike, a 16″ bmx type bike and he just could not keep up with his cousins. He was also practically hitting his chin with his knees over and over as he pedaled. It made for a rather frustrating adventure on everyone’s part. But, he kept at it and kept trying.

These are some nice training wheels that look like rollerblade. Then we discovered that the wheels light up when they spin. The training wheels package also came with a little bell and that thrilled Andy to no end.

We’ll be going out each night when the parking lot clears out so Andy can practice. By the end of the Summer or sooner he’ll be off those training wheels for good. 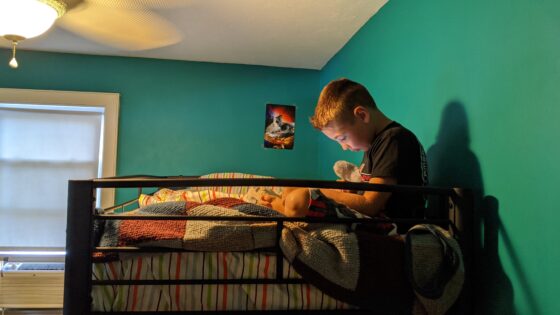 Andy has hs new room now. He’s so excited for his new bunk bed. I’d seen it in Big Lots years ago and thought, “Man, if I was still a kid I would love a bunk bed like that.” It is solid, black and has a futon on the bottom. So there is room for sleeping and hanging out. Andy has had the smallest room in the house for so long and now he’s just so excited to have some more personal space. We’ve still got to find the mattress for the futon part and get a shelf up in his closet but then things should be pretty much ship shape.

My new office…. That’s another story.