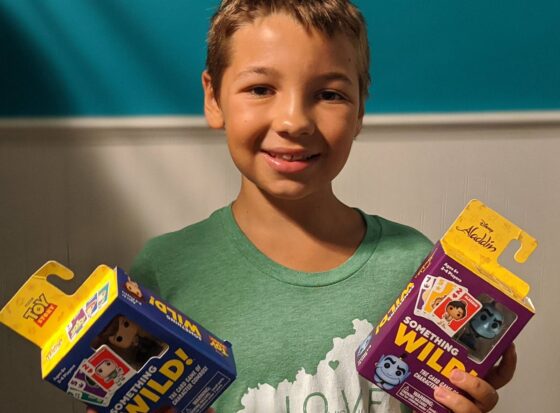 Funko Games provided me with two free samples of their new card game: Something Wild. Opinions are my own.

Funko games has a new card game hit on their hands. With Something Wild you and your family can have a fun night of cards and enjoy adorable Disney characters in the Funko Pop style on the cards.

The game has a bunch of fun ways to play and each Something Wild pack can be combined with the other ones. So there are six Something Wild decks: a Classic Mickey Mouse one, an Aladdin, A Little Mermaid, A Toy Story, A Nightmare Before Christmas and a Disney Villains one. Each game comes with a mini Pop Figurine that is part of the game. We received Toy Story and Aladdin. Toy Story comes with a Woody Figure and the Aladdin one comes with The Genie. Gameplay starts off a tad tricky but you quickly figure out some strategies to really work the game. 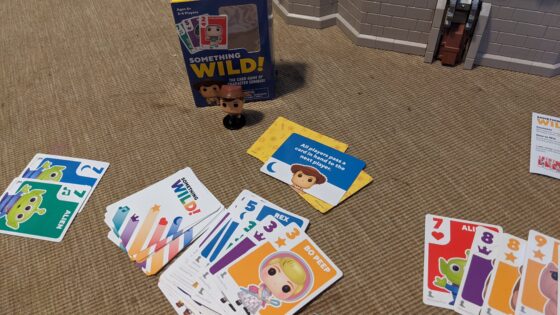 Andy and I played our first round together using the Toy Story Something Wild deck. Each player gets 3 character cards and they need to score in order to capture Power Cards. They need 3 Power Cards to win the game. In order to score you have to either get 3 of a kind cards in any color which would be a set. You can also make a run which is 3 cards in sequential order of the same color. Things get tricky when you get to play a Power Card. If you get one that turns 2’s into any number then you can really mix things up. All the while the game goes on and players must also attempt to capture the figurine because you can only play a Power Card if you have the figure. The game gets really, really wild when you combine decks and have several sets of Power cards and figures switching hands over and over. The game is fast paced and fun with some of the cutest character artwork around. I’d like to find the other four sets and play a really big game of Something Wild with the whole family. The thing is, each version of the game has 10 unique Power Cards and each one changes the game a little bit for increased fun!

You can find all of the games on Amazon.com and if you are interested in playing too then please consider using our affiliate links below. They are $8 each and make great stocking stuffers!