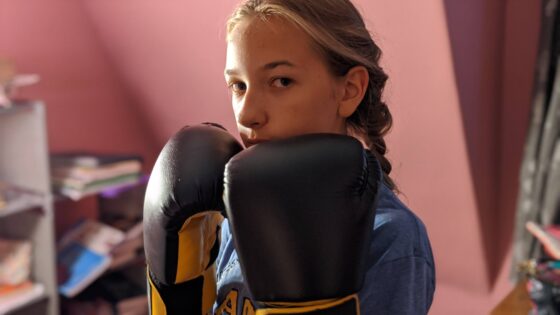 We got Eva her first pair of real boxing gloves today. she had a pair of kids gloves that were just for playing around. These ones are serious. Since Eva is now doing Jr. Krav Maga she’s going to need some gear to go with it like boxing gloves. She’s also need some MMA gloves at some point and a whole kit of other items. We’ll get to that. Right now there is no need for these things since there is no sparring happening until we are able to get close enough to spar.

I had been at my Krav Maga class in the morning and I spoke with Sensei Howard and let him know that I was looking for gloves for Eva. He said that one of our adults ordered a pair but they came in at too light a size and he had them in the storeroom. They were yellow he said. Eva can rock yellow so I said that we’d get them when we came in for her class later that afternoon. When we got the gloves I said that they looked like Bruins colors. Eva said that they were more like Bumblebee. She is a Transformers fan deep down and loved our time driving a Chevy Camaro years ago. When she said Bumblebee I immediately said, “Float Like A Butterfly, Sting Like A Bee.”

Eva said, “I like that”. I said that it was from Muhammad Ali, one of the greatest boxers ever. I think we may take some sharpies to the gloves and add that saying to them. “Float Like a Butterfly” on the left and “Sting Like a Bee” on the right.

We practiced a few of her drills tonight, too. She’s pretty solid for a kid who is on the thin side. She can slam into me and knock me back when needed. I’ll have to get my protective gear out the next time we work together.