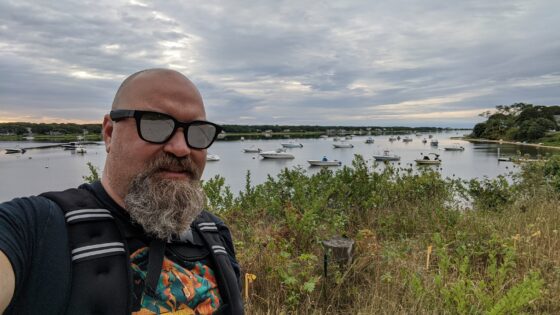 I’ve been walking an average of 30 miles a week since June 4th. That was when I joined the ranks of the fitbit family, or at least this family where each members has a fitbit. The kids got them first and then Allison was doing a walking challenge with folks from work. I was the last holdout and then I too got one in time for a walking challenge at work. It was pretty glaring how little I moved throughout the day and since I put on the fitbit I’ve been moving a lot more.

Allison and I have been taking daily 3.5 mile walks to start the day. I then added the use of a 30lb weighted vest for more of a workout. Because of this walking we have both made a little progress on some weight loss. Nothing huge but it has made a difference.

Today I walked along Great Bay on my own because we were still at the Cape and Allison still at home. We went home later in the day in time for Eva’s Jr. Krav Maga class. Her class got a small taste of the work that my class did on Tuesday, something I’m still sore from. Lots of Push Ups. Eva actually helped me in my class today by holding pads for me as I did the lesson. I keep trying to get her to come to class with me some morning. She won’t but I am glad that she is taking the Jr. Krav classes now.