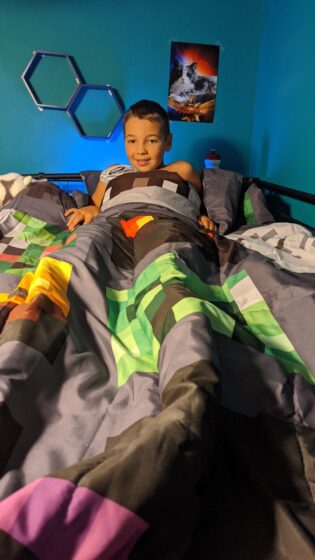 When Andy got his new bed and bedroom it was also time for us to change the decor a bit so that it was more grown up than the comforter that he had when he was 3. Andy decided that he wanted to have a set of Minecraft sheets and a comforter. Allison and the kids picked up this new set for Andy yesterday at Target. Tonight he got to sleep on the sheets for the first time. He was very excited.

Andy has been enjoying his new bedroom and new bed very much. This weekend he transformed his futon into a fort, Fort Jupiter in honor of Camp Jupiter from the Percy Jackson books. He is having fun making the space his own. 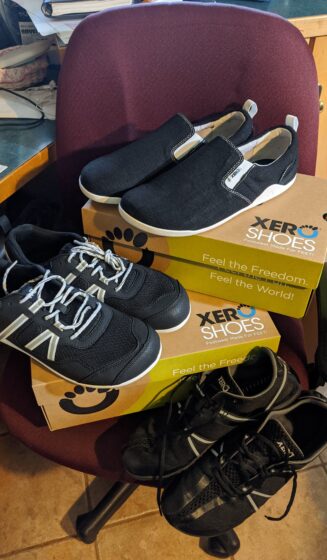 About a month or so ago I ordered some Xero Shoes. These are nearly barefoot shoes and they have been excellent for me. The Xero shoes that I got first were called Speed Force. These are lightweight and can be used for running. I have them for my walking and eventual running. I’ve put several miles on these shoes already as we walk 3.5 miles each day. I’ve also run in them and I like how they feel.

Some new styles have been released and I decided to get a few more pairs. One for the dojo because I cannot go barefoot. One for around the house. The thing is, I am not sure which one are going to be better for the dojo. The Apto is a laceless slip on shoe. While it fits my foot pretty well I sort of feel like it may fly off during a powerful kick. On the other hand there are no laces and so it will be a nice flat surface for the kick. The other shoe that I ordered was the Prio and that is more like a traditional sneaker and they have laces. The Prio is thicker than the Speed Force but fits nice and snug. They have laces and white soles so I won’t mark up the dojo mats.

I also ordered one other pair of shoes. They are called the Alpine and they are Winter Boots. I’ve needed new ones for a while and so I ordered those as well on a separate order. They should be here Tuesday.