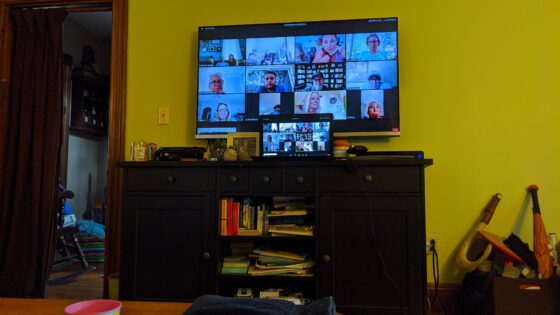 My grandfather turned 94 today and in order to gather everyone together from across the country and in their quarantined homes by cousin set up a special Zoom session for everyone to attend. We got nearly everyone and I think it was something that he enjoyed despite having some difficulty getting connected. Once he was though we all got a chance to talk, play games and have a lot of laughs.

We actually went and visited Grandpa yesterday. We socially distanced in the backyard but the kids were there and Grandpa was very impressed that they were both taking karate. The kids got to ham it up a bit then. I attempted to get him set up and ready to go for Zoom then but that did not happen so well. I then tried to help later that night and that was worse. When we started the Zoom my cousin was on the phone with im trying to talk him through it. Eventually he was able to get on for the first Zoom session then it hit the end and we had to start another and well, he went to Facetime for that. But, it was a good effort.