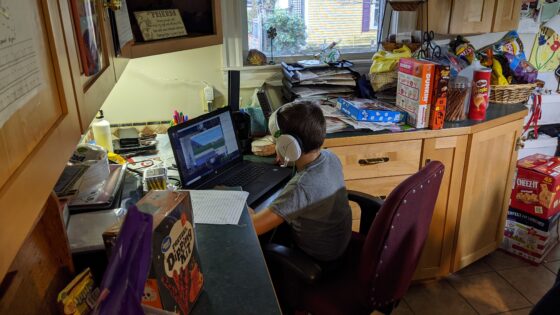 We are working with Connected Camps on a review and so we have Andy in a 5 week course for creating Minecraft games. His course has been compensated and opinions of the program are our honest opinions.

About a month back I was working with the Dad 2.0 conference and there I learned about Connected Camps. I had wanted to find something for Andy as far as distance learning and he was fixated on Minecraft for the topic. Connected Camps has several different sessions all on Minecraft but not just on playing the game, rather how to learn to code or make video games or animate things with it. Andy is already a whiz at making structures on Minecraft and spends time watching how to videos on YouTube. I am very impressed with what he has made. He’s been asking for the XBox version of the game, which I have not gotten because the XBox is mine. So, instead he has the Nintendo Switch version, the Microsoft Windows 10 version and the Java version. He has the last one because that is the version that Connected Camps uses and he has the Windows 10 version because I did not fully read the Connected Camps directions. I just went and bought Minecraft for the PC. Had I thoroughly read the detailed instructions from Connected Camps first then I would not have made that mistake.

Connected Camps offers a free online Minecraft server that is moderated by their expert online mentors. This is a safe environment where kids learn to work and play together online which is a great skill to have and is especially important for kids who are stuck at home and feeling isolated. I want Andy to be able to make new friends in a safe space.

The course that Andy is taking will get him building his own mini games in Minecraft. Today was his first class and I helped him get set up but once we connected with the online mentor for the class she guided him through everything else. I went back to sleep, or rather I tried to go back to sleep. I could hear Andy having a great time in the class. I am excited to see what he learns during this and look forward to him being able to pop in on the free server during the days and times when it is open. This past Halloween weekend they had the server up and running with all sorts of special events for the kids.

Connected Camps is not just Minecraft. They also work with Roblox, Fortnite, Overwatch, Super Smash Bros and more. There are courses on Astronomy, Engineering, YouTube video production and coding. You can see the overview of Connected Camps courses on their website. I hope that Andy continues to enjoy class and we can show you more of what he learns each week.