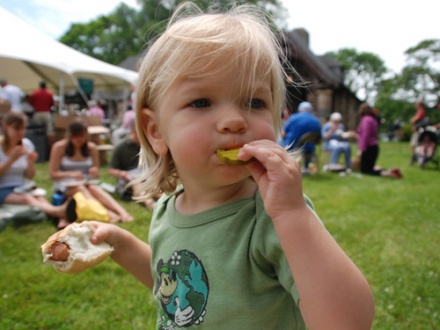 If you want to know anything about Hot Dogs then Rob is your man. I went to him to help out in a couple of contests including my Fry Sauce contest a few years back. I met The Hot Dog Man in 2008 when he was still running his hot dog truck. Then we met up just last year to try out The Hot Dog Trolley. Most recently I asked if he’d reach out to hot dog nation and get some votes for Eva as she is in a photo competition with The National Hot Dog and Sausage Council. Apparently if she wins we get a $250 gift certificate for grillin items. Yay! Here is the photo. 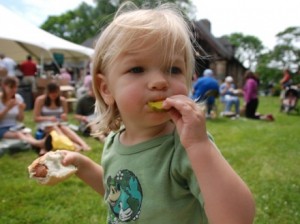 Taken in June of 2009 at the St. Barnabas Church Strawberry Festival.

To vote for Eva, simply email the contest at contest@hot-dog.org and vote for Eva. You should paste the following into the email:

But this post is mostly about Rob and I’m hoping that one of his stops will be over to Tex Barry’s in Attleboro so that Eva and I can share a Hot Dog with him.

June, 10, 2011, Natick, MA- Rob Merlino, a former hot dog vendor turned “ambassador to Hot Dog Nation,” will celebrate National Hot Dog Month this July by eating a hot dog a day at 31 different venues. Mr. Merlino publishes the website Hot Dog Stories as well as several other hot dog related websites. His mission is to explore and publicize the multitude of hot dog carts, trailers, and trucks, plus other dining venues that feature the ubiquitous summer food: the hot dog.

Mr. Merlino ran a hot dog truck for six years. He had two locations during that time, one in Southborough, MA for 4 years and another in Marlborough, MA for two years. Health issues forced the sale of his business in 2010, but he still had a lot of love for hot dogs. So he set out to explore hot dog joints. He visited over 35 different hot dog joints in 2010 and has, at the date of this release, visited 13 places in 2011 (with plans to top 2010’s number).

The idea for the Hot Dog Stories site came to him after appearing on the PBS television show Roadside Stories. “I figured I would take the concept of that show- stopping at the side of the road to hear people’s stories- and apply it to hot dog stands,” says Mr. Merlino. His stories are published once or twice a week from mid April through mid December. He has started making videos of his hot dog excursions and publishes them on Youtube.

The idea to celebrate National Hot Dog Month in a public way was actually a suggestion given to him by one of his story subjects. The particular vendor who gave him the idea wanted him to eat at his trailer for all 31 days in July! Mr. Merlino will document his epicurean feat on his website. “I figure there are always stories in the news about hot dogs in July due to it being National Hot Dog Month, so I decided it would be a good idea if ‘the Hotdogman’ celebrated with a hot dog a day.” Mr. Merlino confesses to eating at least one hot dog a day every day he operated his hot dog truck. “The average American eats 70 hot dogs a year- I guess I’m above average!”