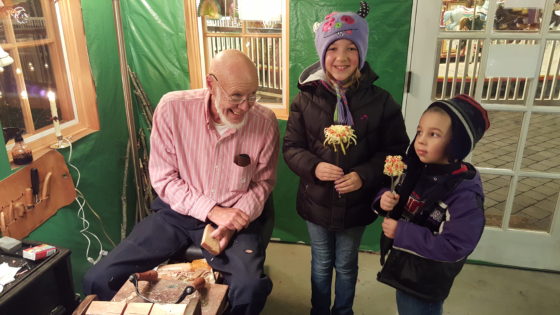 Today we went to Edaville USA. We were hosted by Edaville USA in that they provided us with four passes to enter the park. Opinions of our visit are 100% our own.

Driving down the highway on the way back from our Thanksgiving holiday on Cape Cod the rain was coming down off and on. The sky was dreary and grey. Allison and I debated skipping going to Edaville USA because it looked like it was going to continue raining. We got to the exit and I just decided, let’s go and see what happens with the rain.

I’m very glad that we decided to go. It rained for about an hour but when we got there we went to the Carousel and rode that a couple times so we were not rained on. Then we went into the Old World Whittler and saw the amazing Russian Fan Birds that were made by Skip. He was very kind and patient with the kids. His work was beautiful, too.

After the Old World Whittling Shop we caught the first train we could and rode around Edaville. It was still light so the lights weren’t as awesome as they could be, so I knew we’d go and ride it again later. Despite it not being too dark the kids had a great time. They loved seeing everything on the train ride and got excited about so much.

After the train the kids wanted to go to the Ferris Wheel. So I went on with them and sate between them. It got cold while we were on the Ferris Wheel but it was fun to see the whole park from the top. Once we got off the Ferris Wheel the rain was gone. There would be no more rain the rest of the night. We hit the Nut Tree, Elephant ride and then headed over to Thomas Land.

Once in Thomas Land the kids were able to go on most of the rides on their own. We did go on the roller coaster as a family because Andrew needed and adult with him.

After a few rides the kids got a bit tired and we started to head out. We then saw that Thomas was going to pull the train and so we got on for another ride. This time it was dark out and the lights looked incredible! We had a nice ride and then it was time to leave. Before we left the kids wanted another ride on the Carousel and they begged us to go back to the Old World Whittling shop and visit Skip. They loved spending time there. I think that they were so fascinated by the old tools that he used to make his beautiful birds. Well, he also made flowers out of wood and he made each of the kids their own flower. Just because. It was a magical moment and so generous of Skip to take the time with my kids. You can see our adventure in the video below and then all our photos below. 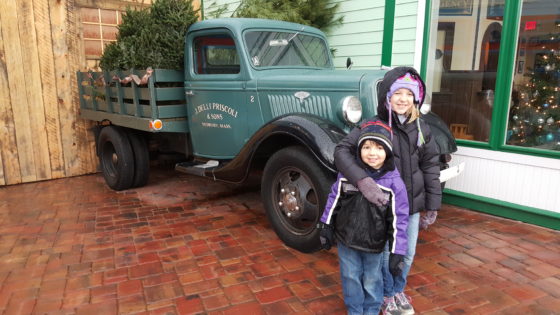 When we came in there was this great old truck and I had to get a shot of the kids standing by it. 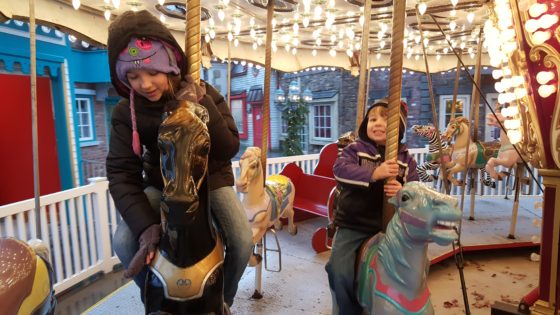 The carousel is still the favorite ride for both kids. Andrew rode by himself on the way out. I went with them on the first two rides of the day. 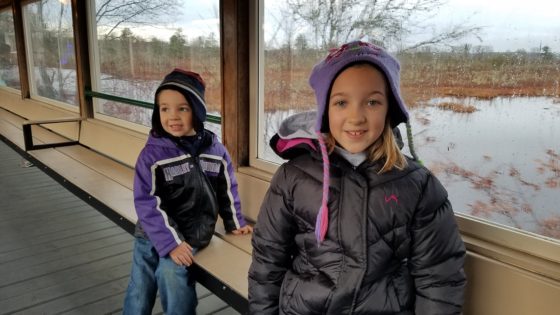 Waiting out the rain was done on the train. 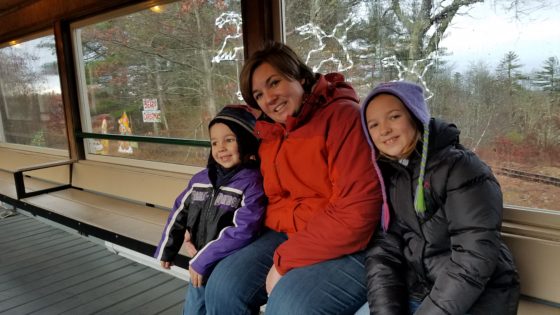 Even though it wasn’t too dark out we still enjoyed seeing the lights and attractions around the train loop. 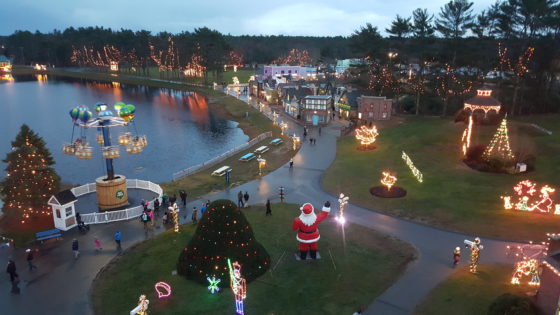 Both kids wanted to go on the Ferris Wheel. I should have had glove specifically for this one ride. It was the coldest part for me. Once we got down I was nice and warm. 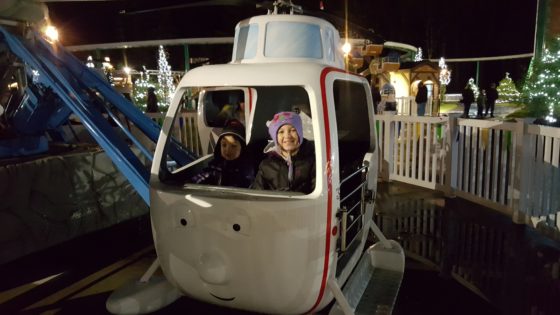 Thomas land had a bunch of great rides just for kids. Andrew left his gloves in this ride and luckily we found them a little while later. 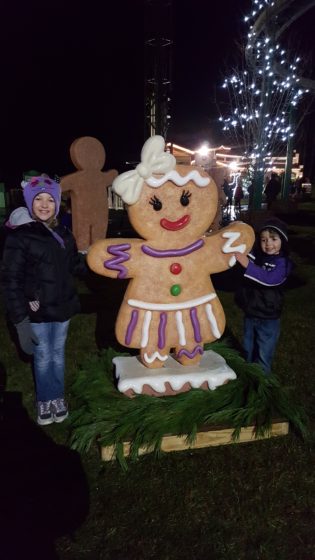 I think that Andrew actually licked this one. 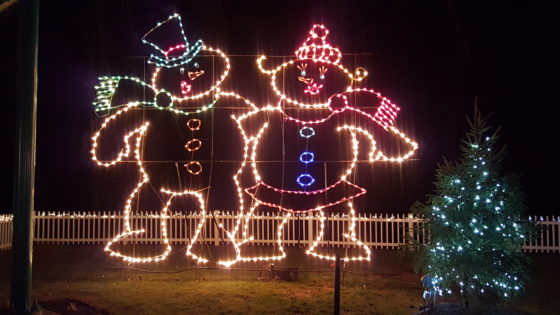 The lights around the park certainly were festive. 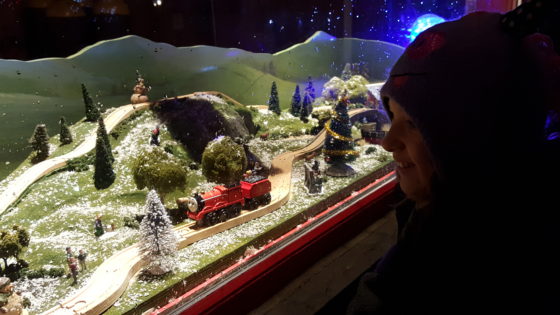 There was a beautiful little Thomas the Tank Engine display on the way into Thomas Land. 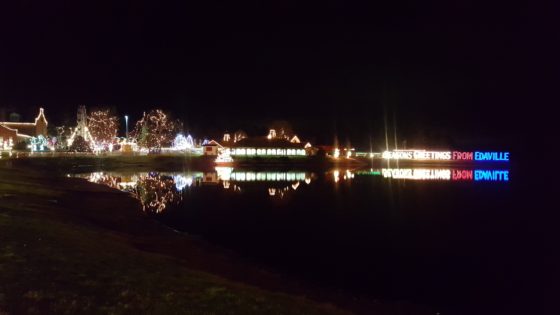 I love the reflection of the lights on the pond. During the warmer months there is fishing available there. 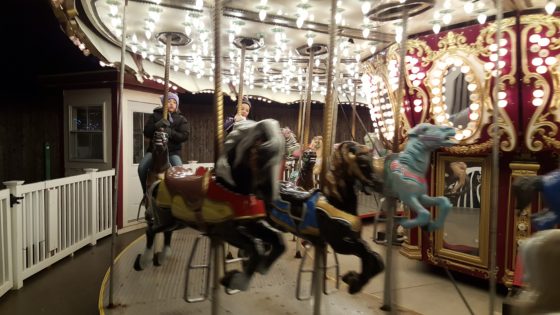 One last ride on the carousel. 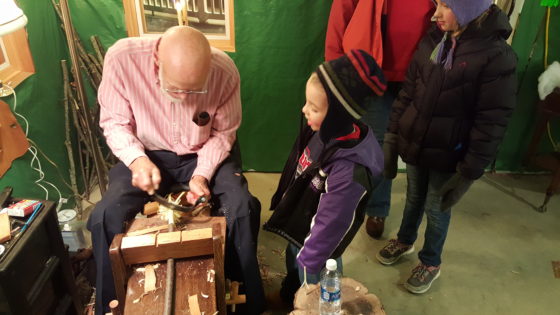 Whe had to stop and see Skip again. He gave both kids a wooden flower. So beautiful and so generous. The kids were enthralled with his work. 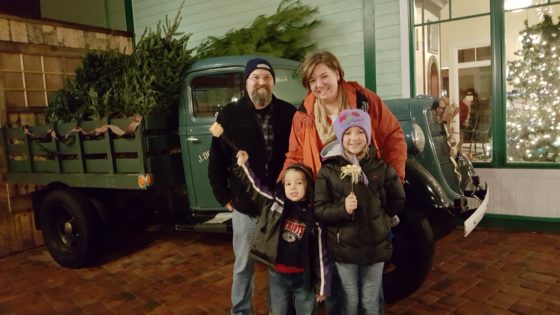 We found someone who could actually take a good photo of the family! They even knew how to use the camera phone and took multiple shots. I love this photo.