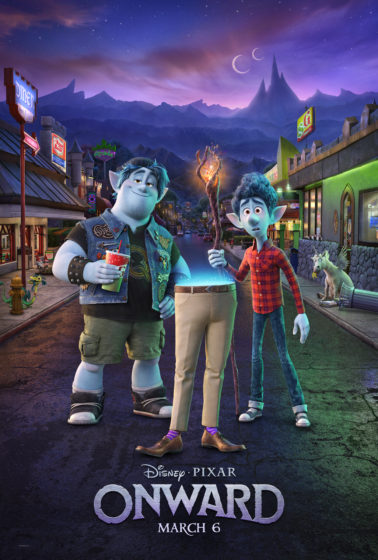 The upcoming Disney Pizar movie, Onward looks like a cross between Weekend at Bernie’s and so many road trip movies set in a fantasy world. The voice cast is pretty great with Tom Holland and Chris Pratt as two brothers who are on a quest to see if there is still magic left in the world. They are also trying to capture one day with their late father. They try a spell but it is not complete and so they only bring their father back halfway. More about the movie can be found below including the new trailer.

Disney and Pixar’s “Onward,” which hits theaters March 6, 2020, unveiled a new trailer, poster and images this morning. Set in a suburban fantasy world, “Onward” introduces two teenage elf brothers, Ian and Barley Lightfoot (voices of Tom Holland and Chris Pratt), who embark on an extraordinary quest to discover if there is still a little magic left out there. Also featuring the voice of Julia Louis-Dreyfus as Ian and Barley’s mom, Laurel Lightfoot, and Octavia Spencer as the voice of the Manticore, Pixar Animation Studios’ all-new original feature film is directed by Dan Scanlon and produced by Kori Rae—the team behind “Monsters University.”