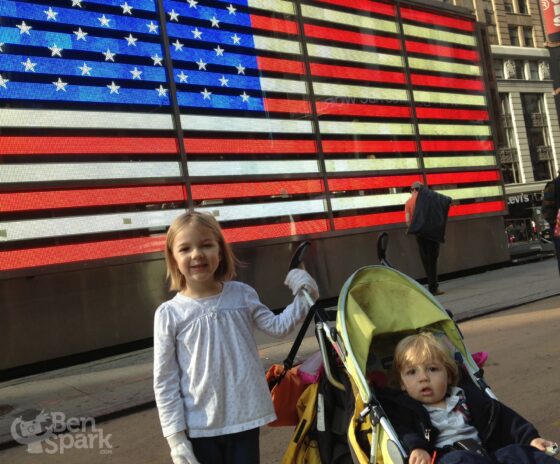 *This was from our trip to New York that I finally got around to writing.*

Today we got up early and got down to the Providence train station to hop the train to New York City. I was invited to attend the Activision Family Game Summit and was able to take the whole family along (Because I paid for our trip, not a blogger freebie). Today is also our seventh wedding Anniversary and so we made the trip an overnight one where we could stay in the city, see some sights meet up with a friend and have some tremendous fun. 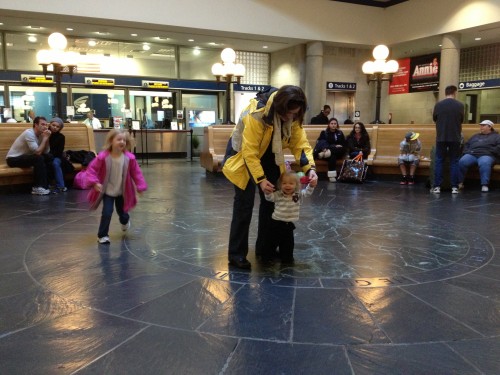 The kids were great on the train. Andrew is still a little hard to settle but Eva was great, she colored and listened to her stories on her iPod and we had a nice time. Andrew didn’t sleep on the way down and we did have to take turns walking him around the train. But for the most part he did okay. The train is definitely a good experience for the kids and it makes wrangling them so much better than flying or driving. I’ve become a big fan of Amtrak over the last few years and go with them on every trip down to New York. 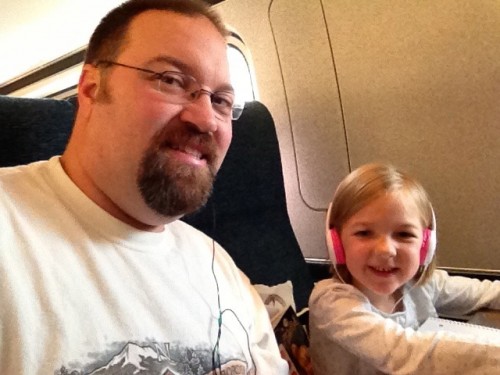 We arrived at Penn Station and jumped on the subway to Time’s Square. We were going to jump another subway train over to our hotel, the Roger Smith Hotel but decided that it would be better to walk and loosen up after that long train ride. Eva was fantastic as we walked, she kept up and didn’t complain too much about how far it was. I wanted to get to the hotel so we could drop the luggage and then go exploring. I had the piggyback rider to use so that Eva wouldn’t have to walk. I have to point out that we were very efficient in our packing and got everything into 1 diaper bag, an umbrella stroller, a backpack and a smaller roll-aboard suitcase. Allison did a great job of condensing and cutting things down. 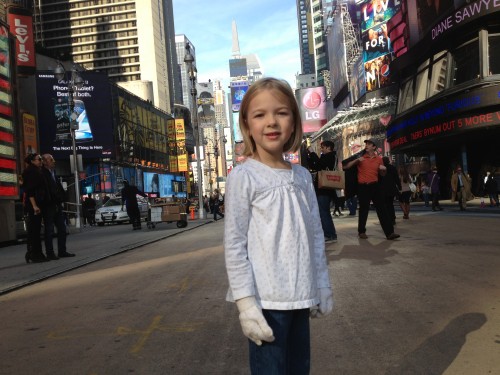 Of course only packing very lightly wasn’t too helpful when I got splashed with coffee on the train because the door between cars slammed me unaware. Then at a stoplight a bird pooped on my shoulder and at dinner I topped off my mess with marinara. 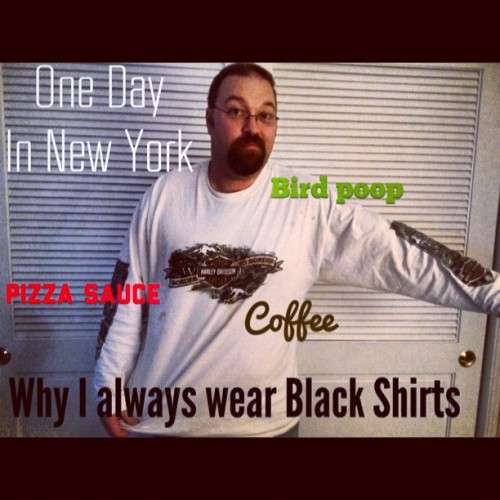 We walked through Times Square and Eva got to see where Good Morning America does their show. She also got to see all the people dressed up for photos. I avoid them on my solo runs to NYC but Eva wanted to stop and get photos taken. So we took a few. There was one Elmo that actually grabbed her and picked her up to a photo. We were taken aback but our wits weren’t with us to challenge the aggressive dirty costumed Elmo. So we took a picture and gave them a dollar and I held even tighter to Eva’s hand after that. 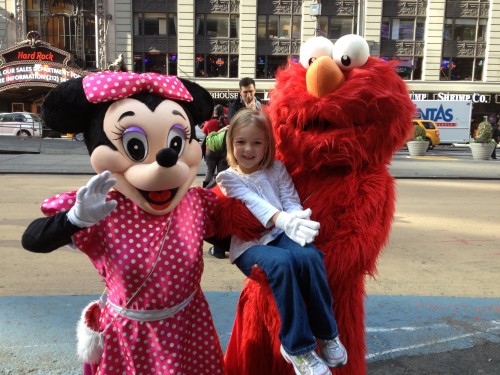 We made it to our hotel and they were so accommodating. They had our room ready for us and checked us right in. They noticed Andrew and asked if we needed a crib, we did and they sent it right up, set it up and were so polite. The room was amazing, it was a suite, a deluxe suite. I had only booked a Single Room Suite and have no idea how we got upgraded to the larger suite. But, it was great. We had a big living room, kitchen area, a separate small room for Eva and a large Master Bedroom with King size bed for Allison and I. We found out the nest day that there was a patio area right off our bedroom. Wow. 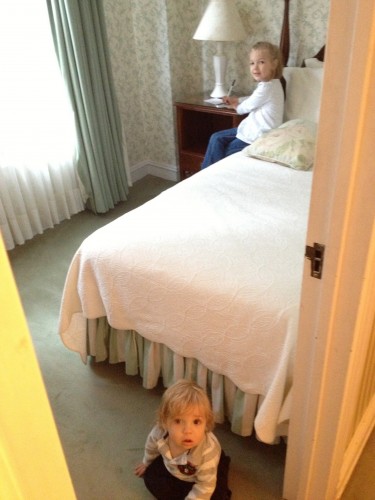 I donned the piggyback rider and put Eva on and off we went. It is something to get looks from people in New York and the Piggyback Rider certainly made people stop and take notice. Eva had a great time up there and she got to see everything. The expression of wonder on her face was priceless. She pointed out so many cool things. 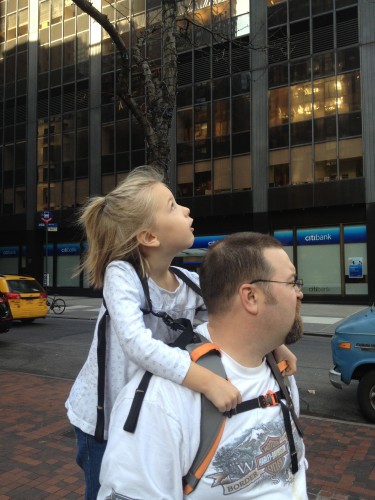 Our first stop was Nintendo World. I thought that since we were going for this family game summit that it would be cool to go to the place where the game system we love most resides. We’re contemplating purchasing a Wii U as well as a Nintendo 3Ds and wanted to check them out. We were at the store for a very short time because Eva had to go to the bathroom and that was the next building over. So we didn’t go back but I would have liked to have seen the mini museum that they have in the store because I’m pretty sure that I still have about 87% of the stuff they have on display. 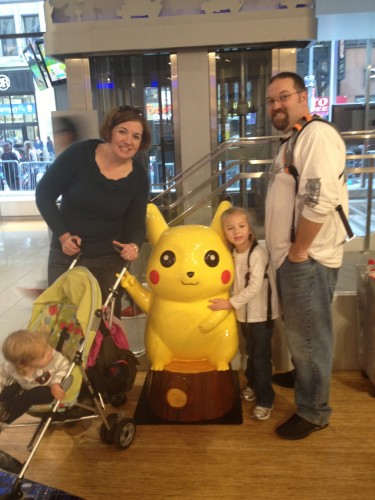 We continued on and walked by Rockefeller Center and saw the people ice skating and also the cool LEGO store that they had there complete with a model of Rockefeller center. When we passed by Atlas holding up the world I had Allison take a shot of me with Eva. As we walked away she asked about Atlas holding up the world and then she said, who holds hup the other planets? Maybe his friends, she said after that. She’s one observant kiddo. 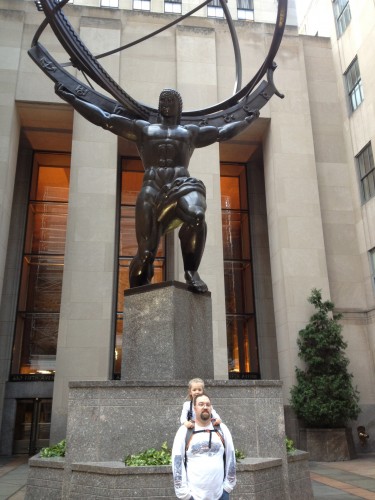 We walked up to FAO Schwarz and took in the sights in that building. What a cool toy store. We wandered the store, saw the Whatnot store (where you can buy your own Muppet) but what we ended up spending most of our time with was the Barefoot Books Boutique in the store. Since Allison is our Barefoot Books Ambassador in residence it felt like coming home a bit. Eva and I wandered the bookshelves and Allison talked with the woman working the boutique. 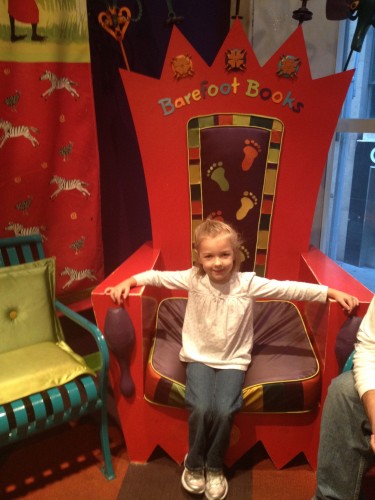 It was time for Eva to pick out something that she wanted. You can’t take a kid into a giant toy store like that and come out completely empty handed. So she looked around and settled for a cuddly Elf on the Shelf (So glad I picked up the movie the other day) She named him New York City Elf. We tried out a ton of names and that is what she wanted. I wanted to name him R. S. Lexington after the Roger Smith Hotel. She wasn’t going for it. 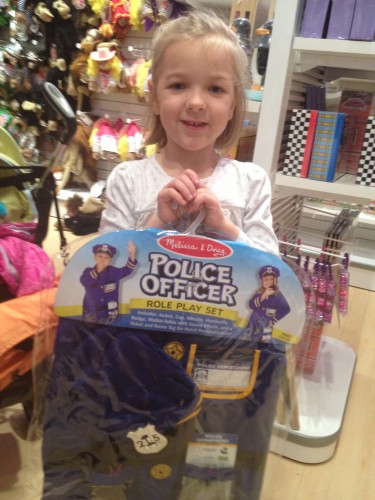 After FAO we caught up with my good friend Kim Ann Curtin. We had dinner at Aperitivo which had amazing pizza. Eva and Kim had a lengthy conversation and then Kim entertained Andrew as well as Eva. They both loved spending time with her. Eva even made drawings for Kim on the way down on the train. She made one of she and Kim and I looked at it and it was cute. I asked Eva if she wanted to see a photo of Kim and she did. then she carefully drew another picture of our whole family plus Kim. Eva did a really good job of that. Dinner was awesome and Kim, thank you so much. We loved spending the time with you on our Anniversary. 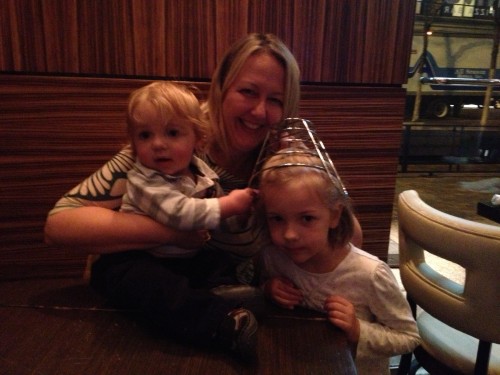 We went back to the hotel and settled in for the night. Eva and I read the Wreck-It Ralph Storybook Deluxe and Allison tried to settle Andrew. Eventually he did settle and we had a nice rest for tomorrow.