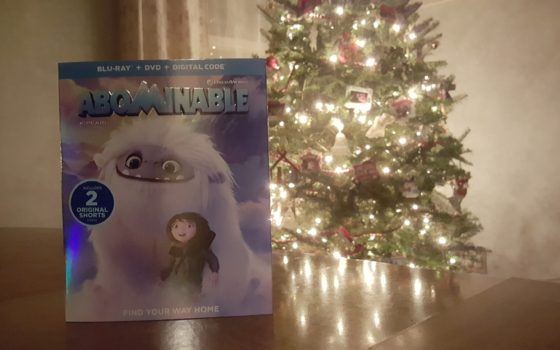 We received a free copy of Abominable on Blu-Ray to watch and review. Opinions are our own.

Earlier this year we took Andrew to see Abominable by himself. Eva was off doing something fun and we wanted Andrew to have something fun as well. So we saw this adorable movie called Abominable. Andrew adored the movie. He loved how cute Everest was and how he had such a fun playful relationship with Peng. Andrew was also excited because Peng is played by Albert Tsai from Coop and Cami Ask the World. I’ve seen Albert in many other things and he is so funny. He was great as Peng.

I was excited to see it because of Chloe Bennet. Chloe plays our main character, Yi. Yi is a teenager who has lost her father and she is working so desperately hard to have enough money to go to all the places in China that her father wanted to take her. I’ve been a fan of Chloe ever since the very first Marvel’s Agents of S.H.I.E.L.D. and I was so lucky to get a chance to meet her in person on the set of that show. This was her first voice acting role and she did really well. I loved the interactions between Yi and Everest.

Tonight we rewatched the movie and this time with Eva. Eva loved the movie, too. Seeing it a second time I really got hit with the emotional arc of the story and also maybe more so because I was watching the movie with my own daughter. We all enjoyed it very much. We also enjoyed all the behind the scenes featurettes and the two shorts that were included. I especially liked Marooned. That was cute short about a robot stuck on the moon who desperately wanted to go home. So he got inventive.

Below I have a whole bunch of things that you can download and watch to get excited about seeing Abominable in your own home.

From the studio that brought you How to Train Your Dragon, this heartwarming and humorous story follows teenage Yi (Bennet) as she encounters a young Yeti on the roof of her apartment building in China, she and her mischievous friends, Jin (Trainor) and Peng (Tsai), name him “Everest” and embark on an epic quest to reunite the magical creature with his family at the highest point on Earth. But the trio of friends will have to stay one-step ahead of Burnish (Izzard), a wealthy man intent on capturing a Yeti, and zoologist Dr. Zara (Paulson) to help Everest get home.

The cast and crew of Abominable talk about the hard work they put into creating a beautifully animated film.