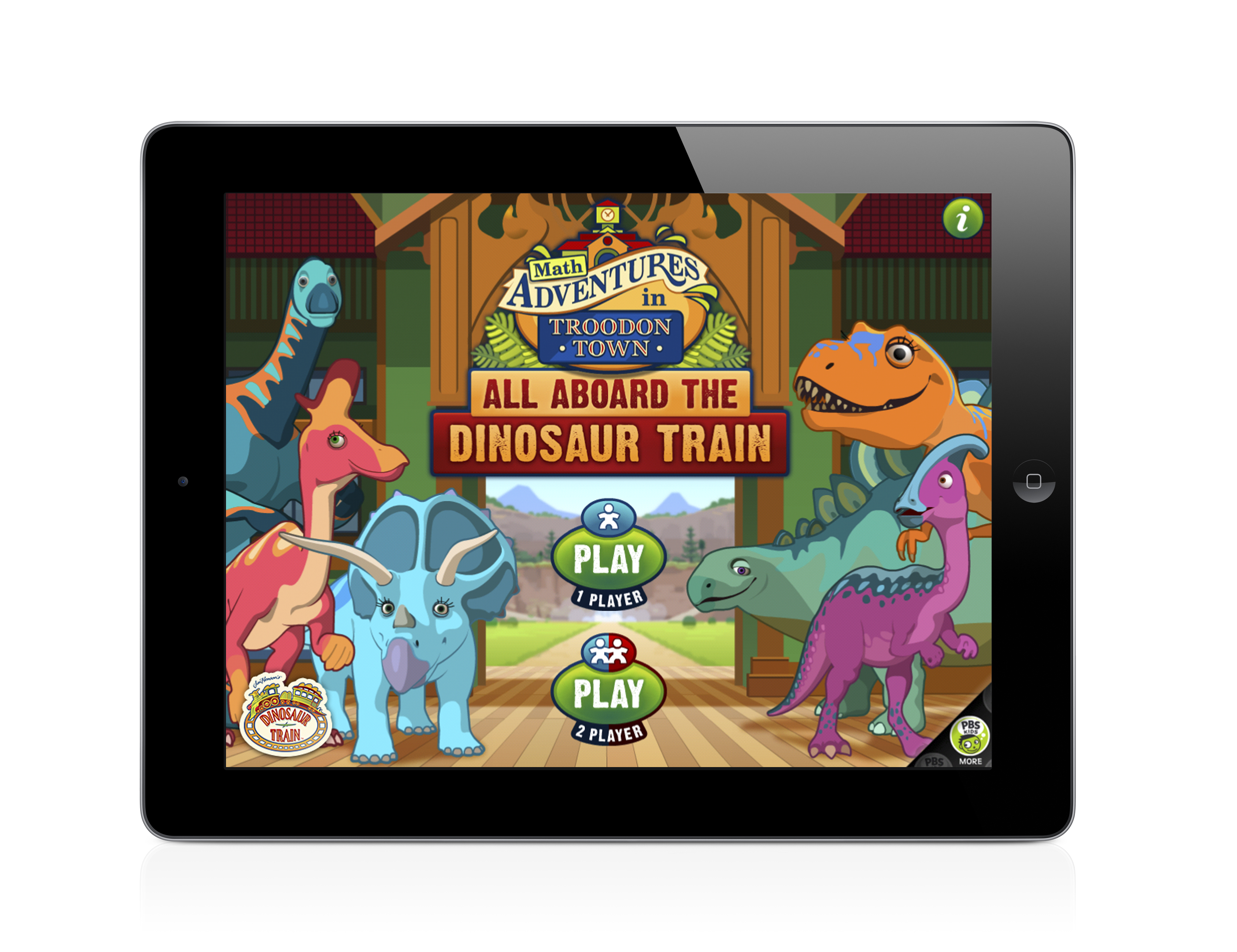 Eva and I received a copy of the new PBS Kids iPad App: Dinosaur Train All Aboard. This is an app that let’s kids put dinosaurs of different sizes into train cars. Kids need to estimate the sizes of the dinosaurs against the train cars. I like this app because it helps kids learn about spatial relations. I personally have always been good about putting things together in the best way possible. For example, when I clean up the play area I find the best way to fit everything in its proper place. I can visualize how to do this easily. An app like this can help kids think about how things fit into place and take that skill outside of the game.

Eva was very happy to play this game. I left her to her own devices with the iPad and she played this game over and over even after I stopped playing. The game does have a two player mode so that I can play with her as well. There are a few levels and the game gets progressively more complex with dinosaurs that may or may not be of equal size and kids need to think more critically about what they are seeing. Eva did really well playing this game and we enjoyed playing it together.

In the All Aboard the Dinosaur Train! App (pictured), the Dinosaur Train is getting ready to leave and needs passengers! The problem is that dinosaurs come in different sizes, so children need to match the passengers with the right train cars, challenging them to problem-solve by estimating dinosaur sizes and comparing them with the train cars’ capacity. The PBS KIDS app was developed in partnership with the Corporation for Public Broadcasting as part of the Ready To Learn Initiative.

ARLINGTON, VA, March 8, 2012 – In a first-of-its-kind collaboration, PBS and the Corporation for Public Broadcasting (CPB) are providing free educational apps to Head Start centers, local PBS stations, and other organizations in underserved communities nationwide. The apps will be downloaded onto devices that families have access to in local Head Start centers and other community organizations. This unique outreach effort is a service of the Ready To Learn Initiative, an early learning effort led by PBS and CPB with funding from the U.S. Department of Education.

Recent research has shown that access to computers, smartphones and tablets is much less prevalent in lower-income households, limiting children’s exposure to educational apps.

Through this program, PBS, CPB and Head Start are working to help bridge this “app gap,” increasing access to educational mobile content for children from low-income families at the community organizations that serve them and are equipped with mobile and tablet devices.

“A growing body of research shows that educational apps can open up learning opportunities for kids, so we are committed to extending the reach of our apps to more and more of America’s children,” said Lesli Rotenberg, Senior Vice President, Children’s Media, PBS. “Through this new initiative with Head Start, we are taking a step towards helping bridge the achievement gap by offering access to the latest educational media content to kids in underserved communities across the country.”

The apps, All Aboard the Dinosaur Train! for iPad and Dinosaur Train Camera Catch! for iPhone, launched today on the App Store. Based on the popular DINOSAUR TRAIN series produced by The Jim Henson Company, the apps are designed to help kids ages 3 to 5 build critical math skills.

“Public media’s mission is to serve un-served and underserved audiences, especially children,” said Debra Sanchez, Senior Vice President, Education and Children’s Content at CPB. “This unique partnership with PBS and Head Start gives children a new way to engage with trusted public media content through mobile devices – one of the most popular technologies in their lives today.”

From now through September, PBS and CPB will work with Head Start centers and PBS stations nationwide to distribute app codes at no cost. The codes will be used to download the two apps onto devices that serve children in Head Start centers, Title I schools, and other community-based organizations in low-income areas. Educators and families in these communities will be able to obtain codes for use on their professional or at-home devices.

“Head Start teachers are always looking for ways to bring new educational content, especially in math and science, into their classrooms,” said Yasmina Vinci, Executive Director of the National Head Start Association. “We are excited for this opportunity to make PBS KIDS’ educational apps available to Head Start programs.”

In addition to this special distribution in underserved communities, both of the DINOSAUR TRAIN apps are also available to everyone in the App Store.

Dinosaur Train Camera Catch! (for iPhone)
The latest PBS KIDS app to utilize virtual reality, this app challenges players to snap photos of flying dinosaurs by moving their iPhone around. Kids “catch” the dinosaurs with their phone’s camera function in a designated pattern, building patterning skills. Dinosaur photos will be stored in a child’s private gallery. The Dinosaur Train Camera Catch! App is available for $1.99 from the App Store on iPhone or at www.itunes.com/appstore.

Developed in partnership with the Corporation for Public Broadcasting as part of the Ready To Learn Initiative, All Aboard the Dinosaur Train! and Dinosaur Train Camera Catch! are part of a suite of DINOSAUR TRAIN games available on the PBS KIDS Lab website (PBSKIDS.org/lab). Combined with online and interactive whiteboard games, these new apps help build a learning experience for kids that takes place across platforms, all with the goal of accelerating learning.

With 15 apps available on the App Store, PBS KIDS continues to develop content across media platforms to both engage and educate America’s children, reaching increasingly more kids and families on-air, online, on mobile, and beyond.

Images of the apps are available on PBS Pressroom.

About CPB
CPB, a private, nonprofit corporation created by Congress in 1967, is the steward of the federal government’s investment in public broadcasting. It helps support the operation of more than 1,300 locally-owned and operated public television and radio stations nationwide, and is the largest single source of funding for research, technology, and program development for public radio, television and related online services.

About The Ready To Learn Initiative
The Ready To Learn Initiative is a grant program managed by the U.S. Department of Education’s Office of Innovation and Improvement. It supports the development of innovative educational television and digital media targeted at preschool and early elementary school children and their families. Its general goal is to promote early learning and school readiness, with a particular interest in reaching low-income children. In addition to creating television and other media products, the program supports activities intended to promote national distribution of the programming, effective educational uses of the programming, community-based outreach, and research on educational effectiveness.

About Head Start and the National Head Start Association
Head Start is the nation’s leading investment in early childhood education and provides a window of opportunity to our nation’s most vulnerable children during the key developmental years from birth through age five. Head Start and Early Head Start’s comprehensive set of education, health, and family support services have benefited 27 million at-risk children since 1965. The National Head Start Association is a non-profit organization representing more than 1 million children, 200,000 staff and 2,200 Head Start programs in the United States. www.nhsa.org

About The Jim Henson Company
The Jim Henson Company has remained an established leader in family entertainment for over 50 years and is recognized worldwide as an innovator in puppetry, animatronics and digital animation. Best known as creators of the world famous Muppets, Henson has received over 50 Emmy Awards and nine Grammy Awards. Recent credits include the Emmy® nominated “Sid the Science Kid,” and “DINOSAUR TRAIN” as well as “Wilson & Ditch: Digging America” and “Pajanimals.” Features include “The Dark Crystal,” “Labyrinth,” “MirrorMask,” and “Unstable Fables” and television productions include “Fraggle Rock” and the sci-fi cult series “Farscape.”

With additional locations in New York and London, The Jim Henson Company is headquartered in Los Angeles on the historic Charlie Chaplin lot, complete with soundstage and postproduction facilities. Independently owned and operated by the five adult children of founder Jim Henson, the Company is also home to Jim Henson’s Creature Shop™, a pre-eminent character-building and visual effects group with international film, television and advertising clients, as well as Henson Recording Studios, one of the music industry’s top recording facilities known for its world-class blend of state-of-the-art and vintage equipment. The Company’s Henson Alternative brand has recently launched the national tour of “Stuffed and Unstrung,” a live puppet improvisational show named one of the top 10 “Best Stage Shows of 2010” by Entertainment Weekly. www.henson.com; ww.facebook.com/hensoncompany; www.twitter.com/
hensonparents

The project is funded by a Ready To Learn grant (PR/AWARD No. U295A100025, CFDA No. 84.295A) provided by the Department of Education to the Corporation for Public Broadcasting.

Disclosure: We received a copy of this app to review. I am a PBS Kids Ambassador for 2012. Opinions of the app are 100% my own.

One thought on “All Aboard the Dinosaur Train! App for iPad Review”