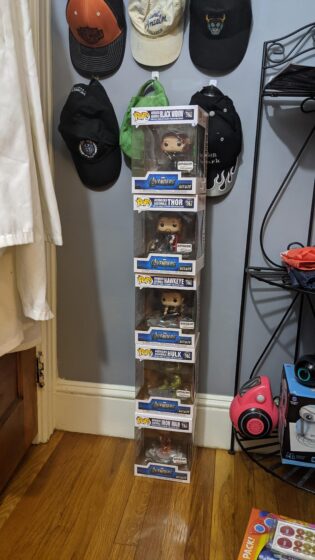 Amazon has an exclusive set of Funko Pop characters of the six MCU original Avengers. The set, once fully assembled recreates the moment in The Avengers first movie where Captain America, Black Widow, Iron Man, Hulk, Thor and Hawkeye prepare to take on the Chitauri horde. The camera moves around the group as they check and ready their gear and put their game faces on. I have 5 of the six so far with Black Widow arriving today. The last Figure will be released on November 20th and that will be Captain America. Once all six figures are here in the house I plan to display them in my office on a lazy susan so that it can spin around and show all of the figures.

IF you are interested in this set then you should check out our Amazon.com affiliate link to the Funko Avengers Assemble page