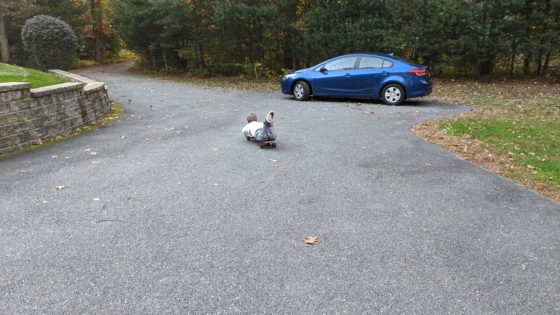 Andrew riding a long skateboard down the driveway of his friend’s house. I took Andrew to the house of one of his schoolmates today so that he could have some one on one time with that friend. This has been a tough year for Andrew and he seems to be having some difficulty with bullying. I had mentioned this to our Sensei at karate to see if Andrew could talk with one of the black belts.

While I talked with Sensei one of the other people in my class overheard and asked me about it. She has a son in Andrew’s class. He was one of the kids picking on Andrew and to nip this in the bud and turn things around she proposed that we get the kids together to play. So we went over and Andrew and her son had a fun time together. I did have to say no to the kids playing and Fortnite. While it is a prevalent thing at school among 8 year-olds we’re not comfortable with Andrew playing yet. He’s seen me play the game because I make Fortnite videos for my YouTube channel. I know that once he plays he’ll be hooked on it. He’s gonna play at some point because that his how he will spend time with friends, but for now he’s not old enough for it.

I spent the time chatting with the boy’s parents about all sorts of things. It was nice to get the boys together and I hope that bonds them more in understanding of each other.

The boys did ride the skateboard together and I totally missed grabbing the shot. We had a nice time. Although, we may not be asked back since I broke a glass and Andrew broke an inflatable sled. Not exactly sure what he was doing. I know that I went to put the glass n a table and missed.