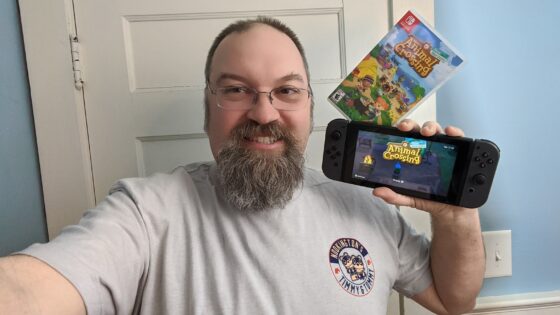 We received a copy of Animal Crossing: New Horizons for the Nintendo Switch free from Nintendo. They also sent me the sweet Nookinton’s shirt. Opinions are my own.

Well, there is no better time to get lost in a video game then when you are required to be in your house for weeks at a time. So the release timing of Animal Crossing: New Horizons is perfect. You can escape to a cute little island filled with adorable friends and neighbors while you perform various tasks to build and beautify your new home.

I have not played any of the previous Animal Crossing games, the only connection I have to this game is through and old game on the Wii U that had you running all over an island and picking up marbles while other people chased you. That was a fun game and I was so good at it. I also picked up some Animal Crossing amiibo figures and cards a while back and they can be used with this game, too.

We played for the first time the day it arrived and while I played through the beginning of the game the kids went and read the text in different funny voices. We all had a good laugh and were excited to play. I hadn’t realized at the time but we could have all been playing at the same time. We will have to explore that option soon. Up to four players can play on the same island at the same time using the same system and game. More can play if playing online or locally. The fun this is to create your island the way you want it and then visit other islands made by friends. There is a real social aspect to this game. It was definitely funnier when the kids were providing voices for each character. We laughed so much.

I have many many things to explore in the game but so far I enjoy the gameplay. It is going to take me awhile to figure out just how to position items around the island and how to cast in front of a fish correctly every time. That has taken a bit of learning. I do like crafting new things and getting more recipes for DIY projects. I’m shaking every tree and as such have gotten stung multiple times by wasps. But, that is island life, isn’t it? LOL.

You’d think that you’d be relaxing on a deserted island but you end up working like crazy all over the place. Not that it is hard work at all but work nonetheless. Tom Nook has got lots of things for you to do on your new island.

I will have to do a livestream of the gameplay soon. 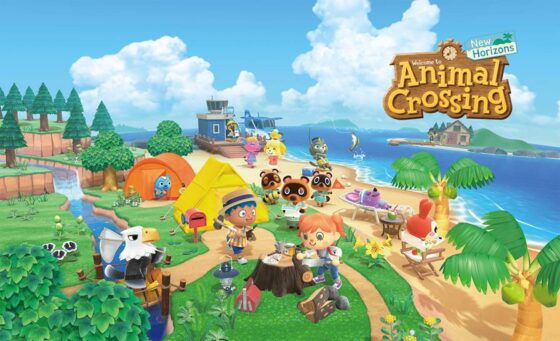 Your Island Getaway Starts Now! Animal Crossing: New Horizons Is Now Available Travel to a Virtual Paradise and Kick Back With Your Nintendo Switch System

In the Animal Crossing: New Horizons game, which is now available for the Nintendo Switch family of systems, you’ll get to travel to a deserted island and create your own paradise as you explore, create and customize your island life.

REDMOND, Wash.–(BUSINESS WIRE)–Picture it: You just landed on your own deserted island paradise. You instantly find your inner peace as you hear the soothing sound of ocean waves. You set up your new tent and, before calling it a night, decide to wander around the island to take it all in. Before long, you will be meeting animal residents, crafting items and indulging in a variety of activities, like catching bugs and sharing your virtual life with friends and family. Your island life is just beginning and there is so, so much more to experience…

In the Animal Crossing: New Horizons game, which is now available for the Nintendo Switch family of systems, you’ll get to travel to a deserted island and create your own paradise as you explore, create and customize your island life. Before you take off for your island, you can design your character and then choose where to set up your tent once you arrive – which you can eventually choose to upgrade to your very own home! You can even customize the actual island itself by putting items like furniture and flowers around the island and, after some time, can even adjust the island’s terrain! As your island develops, new facilities and residents may join your community.

“In Animal Crossing: New Horizons, you can transport yourself to a virtual island paradise,” said Nick Chavez, Nintendo of America’s Senior Vice President of Sales and Marketing. “With relaxing gameplay you can enjoy by yourself or with friends and family, the game is a breath of fresh island air.”

Starting today, free updates will be added to the game throughout the year, delivering fresh seasonal content for you to enjoy. The first update adds “Bunny Day” in April, as well as the ability to use online features, which requires a Nintendo Switch Online membership. Follow the Animal Crossing Twitter account for the latest news and updates about the game.

Whether playing online* or with others locally**, island living is even better when you can share it. In Animal Crossing: New Horizons, you can share an island with others, show off your island utopia to family and friends or pack your bags and visit theirs.*** Even without hopping on a flight, you’ll meet a cast of charming animal residents bursting with personality. Friendly faces like Tom Nook, Timmy and Tommy will lend their services and happily help you grow your budding community, from opening up certain shops, to upgrading your home and decorating it with furniture and accessories – some you can even design and personalize!

Remember that Nintendo Switch features parental controls that let adults manage the content their children can access. For more information about other features, visit https://www.nintendo.com/switch/.

About Nintendo: The worldwide pioneer in the creation of interactive entertainment, Nintendo Co., Ltd., of Kyoto, Japan, manufactures and markets hardware and software for its Nintendo Switch™ system and the Nintendo 3DS™ family of portable systems. Since 1983, when it launched the Nintendo Entertainment System™, Nintendo has sold more than 4.7 billion video games and more than 750 million hardware units globally, including Nintendo Switch and the Nintendo 3DS family of systems, as well as the Game Boy™, Game Boy Advance, Nintendo DS™ family of systems, Super NES™, Nintendo 64™, Nintendo GameCube™, Wii™ and Wii U™ systems. It has also created industry icons that have become well-known, household names, such as Mario, Donkey Kong, Metroid, Zelda and Pokémon. A wholly owned subsidiary, Nintendo of America Inc., based in Redmond, Wash., serves as headquarters for Nintendo’s operations in the Americas. For more information about Nintendo, please visit the company’s website at https://www.nintendo.com/.