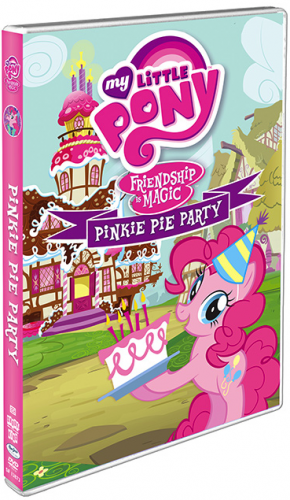 If Pinkie Pie is your favorite My Little Pony then you are gonna love this Pinkie Pie themed DVD coming exclusively to Walmart at the end of the month. With five Pinkie Pie themed episodes and a Party Activity kit you will be well on your way to throwing Pinkie Pie-Tastic parties in no time.

The My Little Pony: Friendship is Magic series is currently airing on The HUB TV Network.

About Hasbro Studios:
Hasbro Studios is the Los Angeles-based production division of Hasbro, Inc. (NASDAQ: HAS). The studio develops and produces shows based on Hasbro’s world class brands, including TRANSFORMERS, MY LITTLE PONY, LITTLEST PET SHOP and SCRABBLE. Many of these shows air on The Hub, a television network for kids and their families. Studio programming can also be seen in more than 170 countries globally. The Hub is a joint venture between Hasbro and Discovery Communications (NASDAQ: DISCA, DISCB, DISCK).